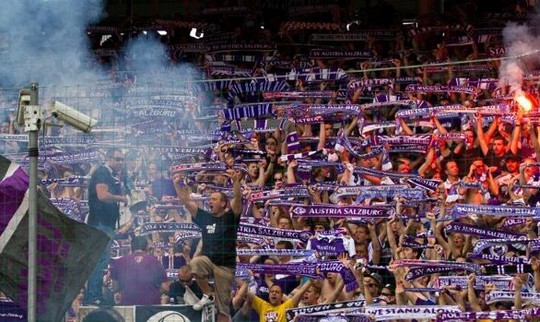 As everybody know multinational concern Red Bull destroyed Austria Salzburg football club in 2005.  Austria supporters restarted with new-old club in the lowest league. This year they are playing in the 3rd division (Regionalliga) and they were leading team on table in autumn. After some bad results FC Liefering become the leader. They were leading by 5 points to the second, Austria. The round before Liefering lost and it were just 2 points between the both. So everything is ready for the big showdown! 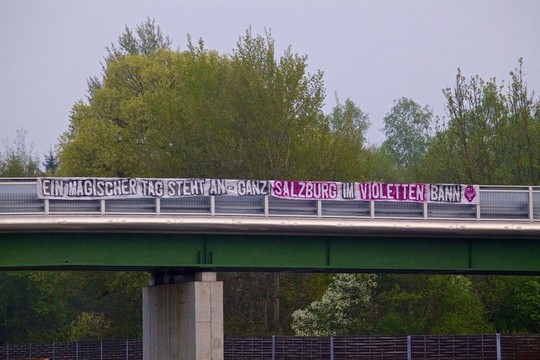 But who is FC Liefering? This team was found in 2012 by Red Bull. In Austria amateur teams of Bundesliga clubs are not allowed to promote in the profi leagues. So Red Bull bought the license of USK Anif and made a brand new franchise team: FC Liefering. Everybody will see that this team is part of the Red Bull network. You will find infos on the official Red Bull Salzburg page, they are playing in Red Bull jerseys, they are playing on Red Bull fields, even the players are from Red Bull. That isn't enough for Bundesliga and Football Association. FC Liefering is allowed to promote in the next division. The Officials said that they couldn´t find a link between Liefering and Red Bull.
The curiosity is that there is another team in the same league, which is called USK Anif/Red Bull Juniors. So you have two teams of Red Bull in the same league. Everything possible in Austria when you have enough money. 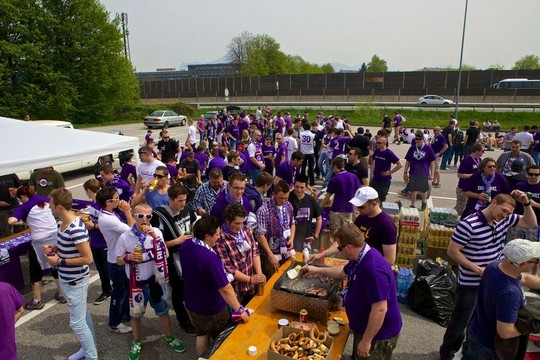 Back to the match: As I wrote it was the big showdown for promotion in the next league. 10 000 spectators came to the „Bullenarena“. New record in Salzburg. The south section for Red Bull customers was closed due to security reason.
In the years before the Curva Viola met up at the old stadium and walked to the stadium. This year the Violets met up in front of the stadium („Occupy Klessheim“). Around 1000 supporters met hours before for drinking and grilling. No home fans were seen. 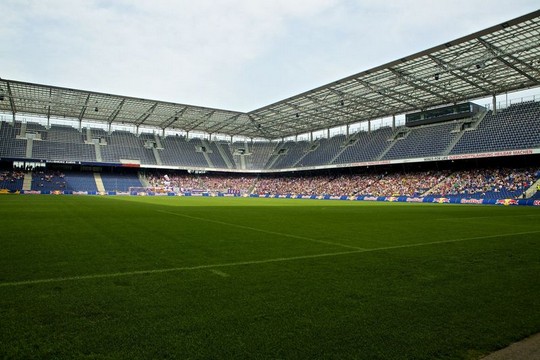 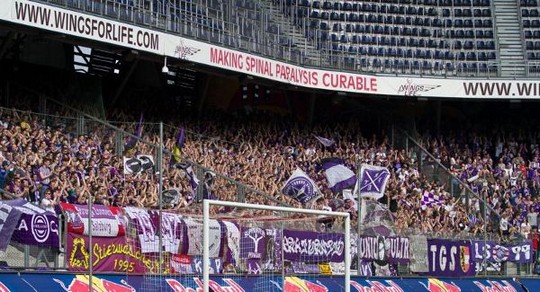 In the stadium the away section was completely full. Nearly 80% people on stadium were for Austria Salzburg. No discussion about the leader in the city. Choreos were forbidden, so Austria fans had only standard tifo (flags, scarves, lots of pyro). Especially the pyrotechnics looked nice. 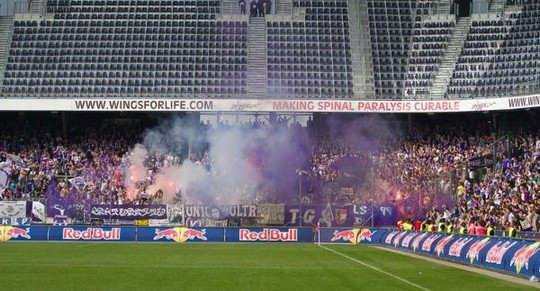 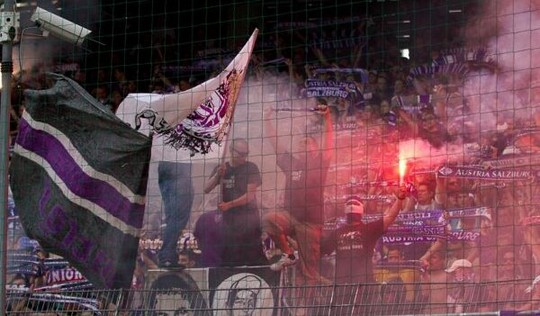 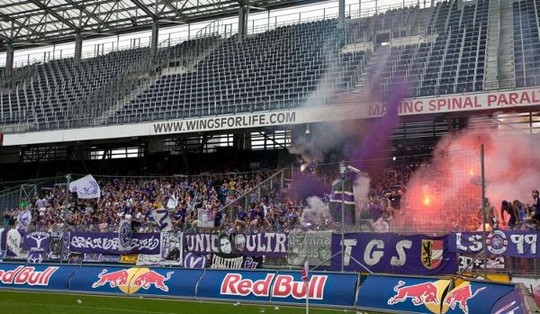 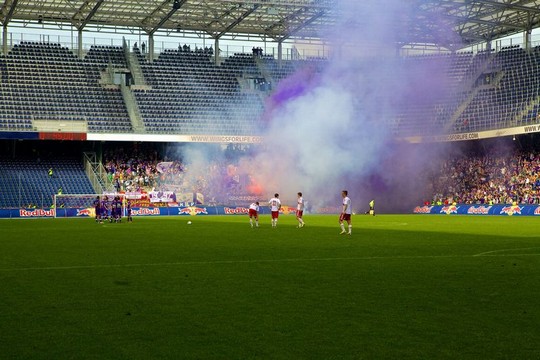 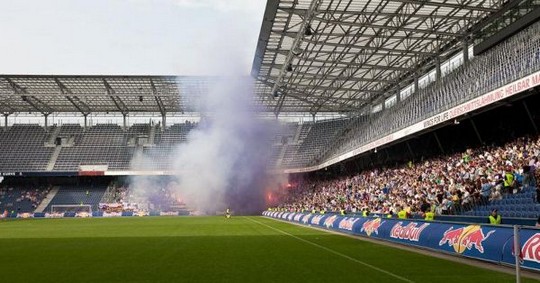 In the first minutes the support was fantastic and extra loud. But as the team wasn´t playing good it became like in other games.  The game wasn´t without real highlights. The referee had to interrupted the game a few times because of pyrotechnics. Once the Liefering players were afraid of perform a corner in front of the away section. Even from the seaters were cups and lighters thrown on the pitch. But all the emotions didn´t  brought anything and Austria lost 0:1. So Liefering will win the championship for sure. 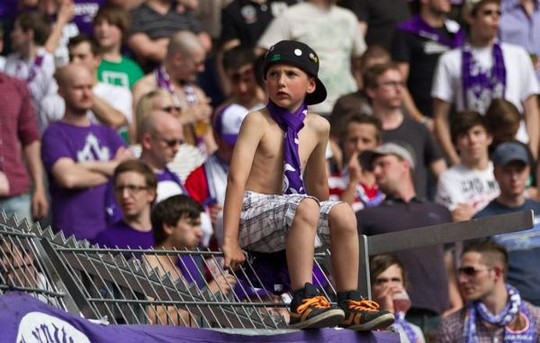 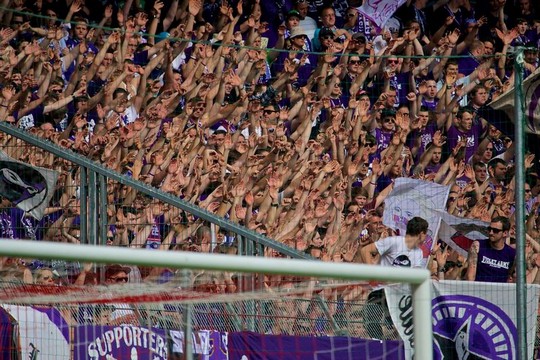 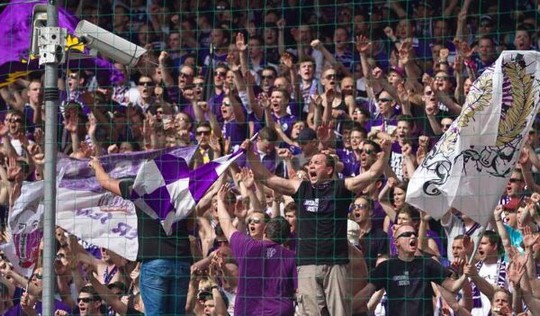 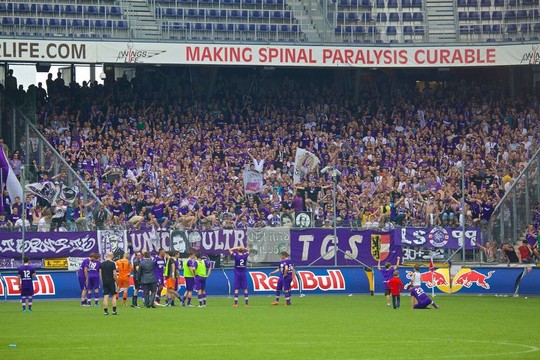 After the game were some dramatic scenes. The Austrai Salzburg fans capo had an asthma attack and collapsed because of a pulmonary embolism. Supporters wanted to open the security gates to bring the capo on the fastest way out. But stewards didn´t want to open it. They didn´t do anything! Then also players and managers tried to open the gate, stewards and security stand just there and watch. Emergency had to come through the full away section to save his life. Supporters helped them to get out the capo. His situation was really dramatic and he must get revitalized. After he was brought to hospital, police tried to arrest away supporters who wanted to help. It´s horrible that a life doesn´t count for Red Bull and security. On the next day they sent a press anouncement that the fans are guilty and stewards made everything fine. Emergency and witnesses said the opposite. Even the news wrote that Hooligans made riots. One newspaper wrote that Liefering Hooligans attacked away fans with fireworks. Was there another game? Media, Red Bull, Police, Bundesliga – FUCK YOU!

A good notice we get a few days later. Our capo got out of hospital and went with us to the next away game!

Thanks Stefan B. for this report!