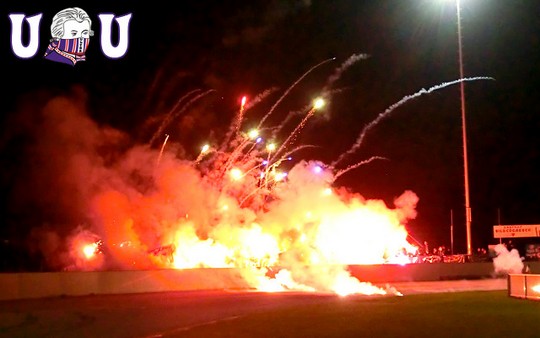 I guess everyone knows the story of the last few years of Austria Salzburg. In 2005 Red Bull bought the club and changed name, team, management and worst of all the colours. Active supporters and ultras scene started a new club in lowest league in 2006. The following years showed that it was the right decision.

This year we celebrate our 80th anniversary. On 13.09.1933 Austria Salzburg developed by fusion of former clubs Rapid (workers club) and Hertha Salzburg (middle class). These years were affected by upcoming Austrofascism and later Nationalsocialism. A tale from the establishment told that founders chose the colour violet as protest against these actions and should show that Austria Salzburg isn´t on a political side (neither red or black). So violet isn´t only a colour like others.

Austria Salzburg never been a real big number in Austrian football. We were a classical elevator team between first 2 leagues. The uprising began in the late 80s and early 90s. In 1989 we promoted in the first division and the golden times started. Otto Baric became coach and formed a team with young local players and some old hands. In 1994 we played UEFA-Cup Final against Inter Milan and won our first championship. One year later we qualified for Champions League in a group with AEK Athen and later finalists Ajax Amsterdam and AC Milan. We failed just because of less goals. This year we won the second championship (one more was following in 1997).
After these great success the club was becoming worse and worser. We had an expensive squad but less income. Every year we had fear of insolvency. Despite a new stadium only hardcore fans came to most games. It´s no surprise that the bigger part of fans celebrated the introduction of Red Bull. While hardcore fans built a new „old“ club, some „third-row supporters“ stayed. There are still discussions which one is the real Austria. As Red Bull bought the license of the team, they are the official follower. But for all others (especially for every football fanatic) the right one is the newly built one.

Why I´m telling you this story? Well, as I told you in the beginning this year we have our 80th anniversary. Some Red Bull fans also said, their club celebrate this date and produced fan scarves with RB and our emblem. They also wanted to make a choreo for this special date. So a little competition started. Because our club is playing in Cup and Championship, celebrations should be later in October (including a friendly game). There will also come a book about Austria Salzburg (the right one). As more and more newspaper wrote stories about who´s the real Austria, fans must act.
On the evening of 13.09. around 80 supporters celebrated together an non-official birthday party in a traditional brewery. 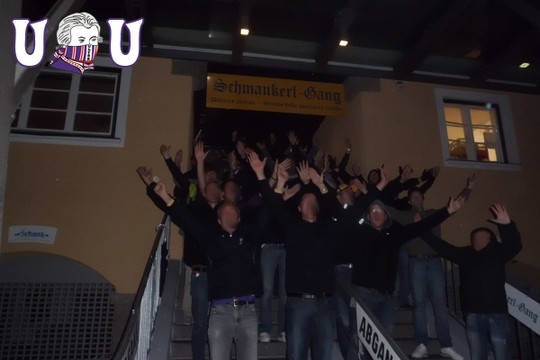 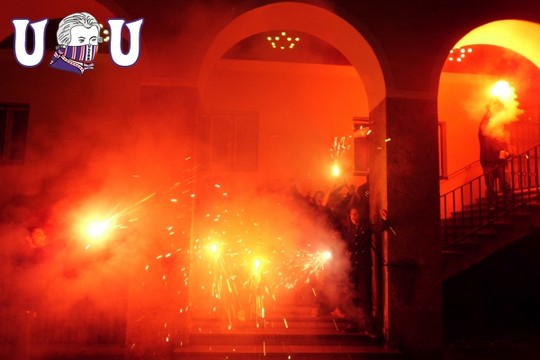 Even police could not avoid it. Red Bull fans have done nothing. Our club played the next 2 games away, so we weren´t available to make a tifo. But as we had an evening game in St. Johann, we prepared a birthday firework. 80 flares and roman lights were fired in half time, it was the biggest pyro show in an Austrian stadium this year (during  a game). 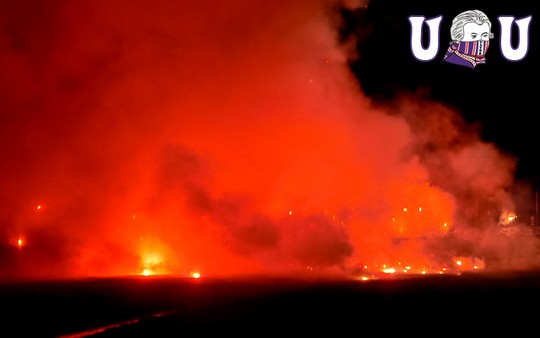 On this weekend the biggest newspaper in Salzburg published an interview with former club president Rudi Quehenberger (he led the club during the golden times and was significant for the selling to Red Bull). He talked on 3 pages that the only Austria is Red Bull, Red Bull is the greatest and much more bullshit. On the next home game of RB there should be a great 80 years anniversary. We were walking on coals. On match day nobody noticed a tifo or any celebration. Just 3 former players and Rudi Quehenberger were standing on the pitch and talking about old times. Maybe they should look at this video for british TV:

I guess Red Bull supporters watched it before and cancelled their tifo.

2 days later we showed them how a celebration should be: Union Ultrà prepared a nice tifo for the cup game against Mattersburg. Fire is an essential thing at a party, so we lighted a couple of flares at our stand: 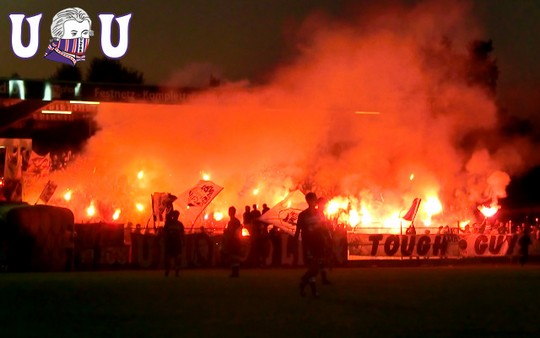 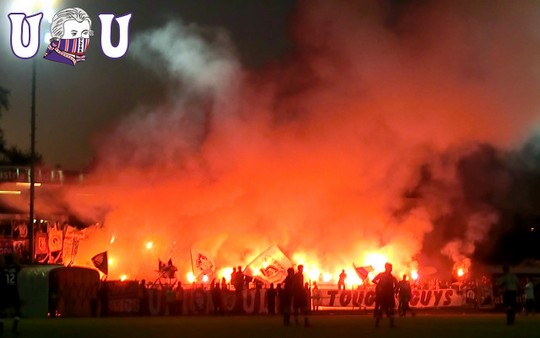 The only thing which didn´t fit, was the score. We lost against the higher class team in penalties. But the atmosphere was really nice and showed once more: In Salzburg only the Austria! Fuck Red Bull!