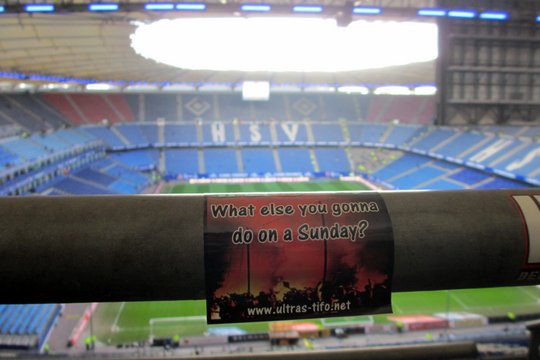 One of the admins of Ultras-tifo.net attended this match in the northern part of Germany.

Not the most interesting match in Germany, but definitely worth to go if you are in the city, like beer, sausage and football.

Due to a conflict about the leadership of Hamburger SV, the main ultras group Chosen Few decided to boycott all matches this season because of the "commercialization" of their own club. Instead Chosen Few support the U23 team.

- Distance between Hamburg and Monchengladbach: 446km.

We bought our tickets online on the official club page few days before kick-off just in case it went sold out. Price for the highest level on "Nord tribune" was 20 euros. This tribune is also the main supporter stand at Imtech Arena.

We used the local city train to to the stadium. Easy to find the direction, as the main stop is marked with the stadium name on all train maps. From there you can walk 10-15 minutes or use the free shuttle buses. And best of all, when you have a ticket for a Bundesliga match, you can use the transport system in the city for free!

20 euros for match ticket + transport is not bad for a top league match in one of the worlds most famous football leagues? 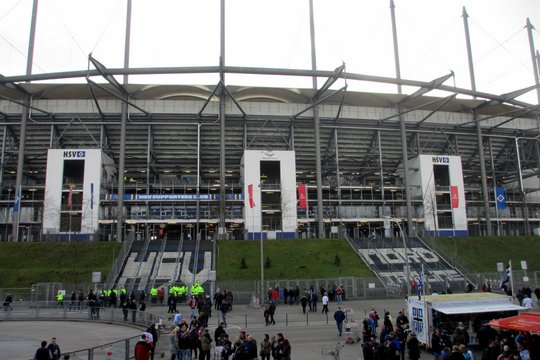 The security check to access the stadium was just as normal. The doors opened 2 hours before kick-off. If you arrive even earlier to the stadium area, you will find a few beer tents to hangout in. 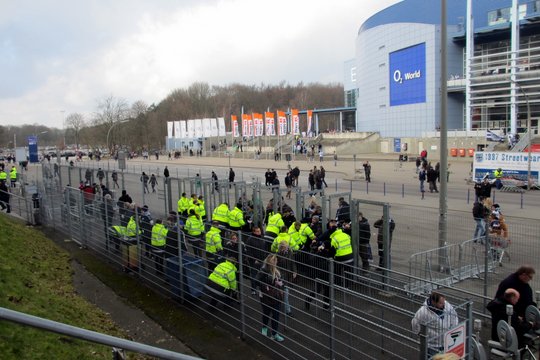 One of the support groups (Poptown Ultras?) had prepared a small choreography for the match. Few plastic flags with a banner. You can see a video of it further down in this article.

All seats on the whole lower sector on the Nord Tribune are removed. Really a great sector with capacity of a few thousand fans. 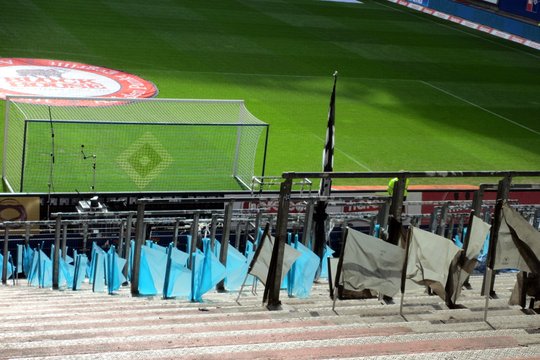 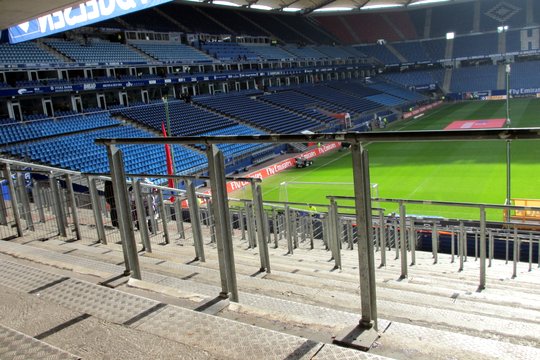 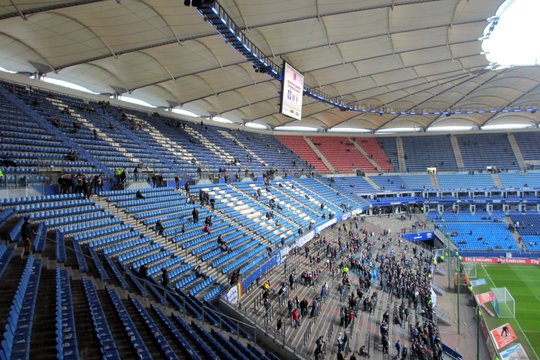 Up in the corner on the North Tribune is the sector Chosen Few had. As already mentioned, they boycott the games now days.

I was little bit surprised when I saw their sector was now taken over by a few hundred "new" supporters, mostly youths. No group banner could be seen, but they had some waving flags and drums, they also took part in the atmosphere. Bit disrespectful to "steal" this sector when Chosen Few have a boycott. They should respect this boycott and at least leave the sector empty. 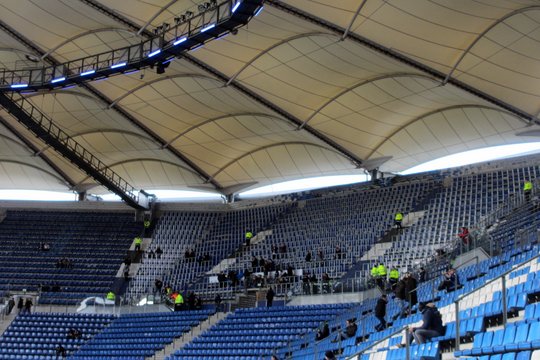 Before kick-off we got some more beers inside the stadium. Plenty of kiosks selling sausage and beer.

There is also some nice graffiti on the walls in this area. Great place to hangout, but the beer was a bit expensive for German standard. 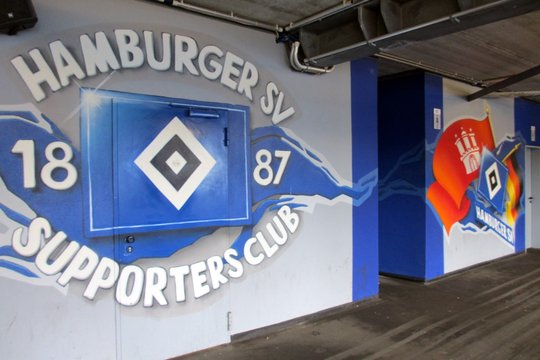 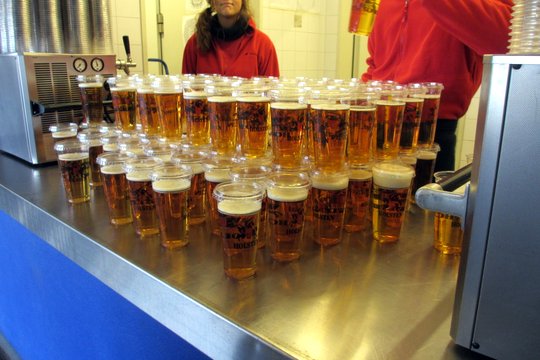 About an hour before kick-off the stadium started to be filled. First to make any atmosphere was the big group of green/white fans of Borussia Mönchengladbach. They filled the whole away sector in the opposite corner of where we sat. The away sector exist of 3 floors, but the most active supporters stood on the lowest sector.

Hamburg supporters were a bit quiet before kick-off. Atmosphere in the home end didn't really kick off until players entered the pitch. One small choreography was displayed by Hamburg fans. The same group who had the choreo also organized the atmosphere on the Nord tribune, without the best response...

Hamburger SV is only one point ahead of relegation place in Bundesliga. The club have played in Bundesliga 1. for incredible 51 years in row. One place in the stadium they have a blackboard counting how many years, days and minutes it is since they were promoted to the top division in Germany!

After 73 minutes of the match Hamburger SV finally scored. The whole stadium exploded and celebrated this very important 1-0 goal. Finally the atmosphere started to be good as well, because with the boycott of Chosen Few, we were really not impressed by the home fans.

But in the very last second of the match Borussia Mönchengladbach got their goal and the match ended 1-1. The green/white away fans were loud most of the match and even louder after final time. Home fans in the Nord Tribune stood left to applaud their players and hopefully give some motivation for the next very important matches. 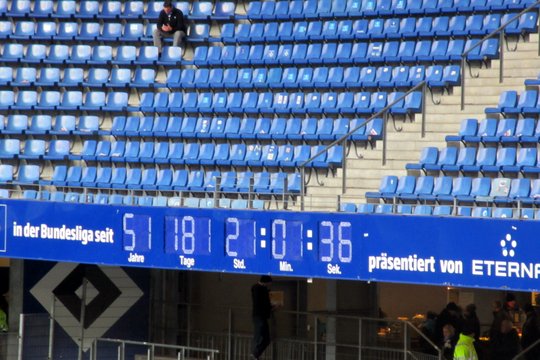 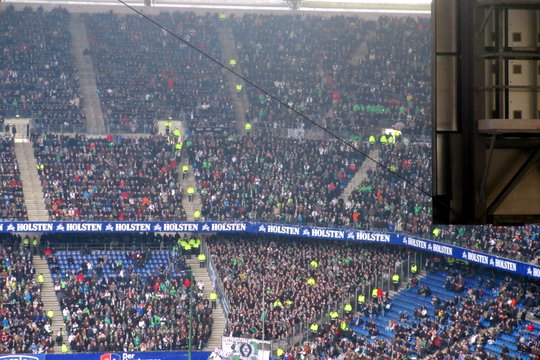 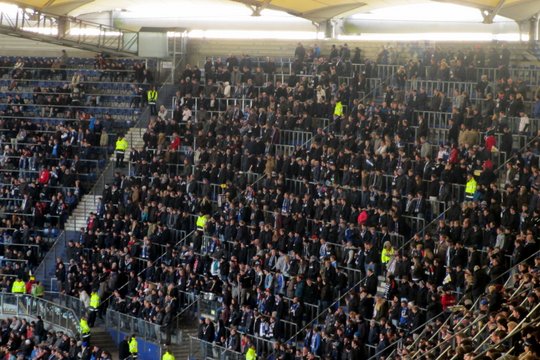 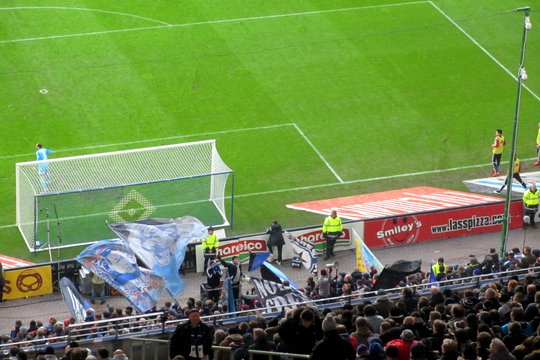 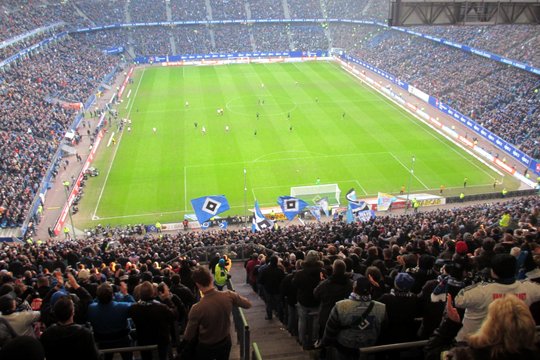