Match report from qualification match for World Cup 2010. between Belarus and Ukraine.

Departure to Belarus - presumably, the simplest from all possible departures in the context of collapsible Ukraine, that is why and interest to this match tepefied long before a beautiful number 09.09.09. Taking into account tournament position and simply necessity of victory, amount of persons interested to depart increased with every instant, blessing to reach not after expensive it was absolutely not problem. The first groups of Ukrainians began to arrive to Minsk in Tuesday early in the morning. Absolutely adequate boundary service and a minimum of militia is in town. The capital of Belarus met guests very clean streets and fine weather. On a background washed-up sidewalks and cut lawns Ukrainian stickers on posts simply all the same struck the eyes.

And on a next morning the center of city was simply captivated yellow dark blue. After a "open-armed" welcome in Lviv many expected an alike situation and on the match-answer of these commands, but the Belarus militia is too severe, and any troubles can cost very expensive for adrenalin lovers - as a result except for an incident in Gomel stickers was marked only two stickers with inscription of "fat in furnace!" on a guest sector. Before a match our north neighbours conducted a march the streets of city and set fire black smoke outside a stadium, and farther supported the combined team in two sectors after a gate. At the beginning of match is a module show with inscription "12", and farther it follows to mark the active use claret-white flags, naked torso in the second period and banner, addressed to Artem Milevskiy, which hinted at the corruption of forward of Kyiv "Dynamo" (Artem was naturalized Ukraine in age 16, and to that was stickers), and hissed 15th number owners strongly. To support of basic torcida it absolutely was not heard on a guest sector, but it, presumably, features of acoustics of stadium in Minsk. Actively enough behaved and usual fans...

Ukrainians arrived indeed much, guests without problems filled a guest sector, what geography of fanaticisms strikes at - from Chernihiv and to Simferopol, from Ivano-Frankivsk and to Lugansk, there were all in a word. Survey - so to itself, but on a stadium it is forbidden to call with backpacks and bags - they must it was be abandoned in the "chambers of save", the role of which was carried out by busses on the perimeter of stadium. Ukrainians began to spread banners and here appeared, that places on grates and half the brought will not last the. Modeled where it is only possible, and after a sector, and from one side, and above passage-ways, and in a few the layers. And upon completion supporters from Dnipropetrovsk in an interruption hung up the linen over Poltava and Kyiv, saying something like "your banners the first period hang up, now our turn ".

The fans of Karpaty brought a drum, the Dnepropetrovsk bus is a banner 10х10 with Large Coat of arms of Ukraine, which was stretched on the output of commands. Vocal support began after implementation of hymn. A sound hardness to name excellent. Absence of unique spokeman and unique drummer obviously it not instrumental in, but did everything that could, to drive a command forward. Folk songs which before was not executed on the combined team appeared in a repertoire, and not all people knew words. In addition local кузьма on a nearby sector constantly something tried to lead, that is why on their "Belarus! Belarus!" Ukrainians mockingly answered "Fuck! In the mouth of Fuck!", and on "we need goal!" - "Yu-shchen-ko!". A naked torso in the first period and small crush is with the local guards of order, which understood quickly enough, that they would not be able to compel Ukrainians to be not trampled down by feet on chairs. Events on the field disappointed only, and the end of match Ukrainians met flares, abandoned on the field, and to indignations on own players, which, in essence, itself was buried, it is not still lost although. A few incendiaries a militia detained, but released soon, conducting "manual conversation"... 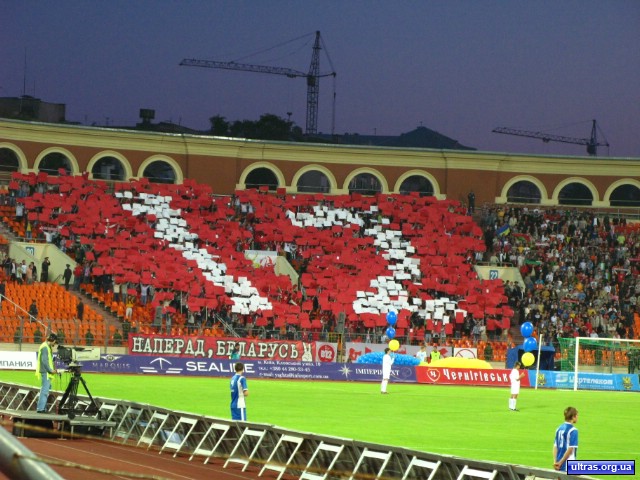 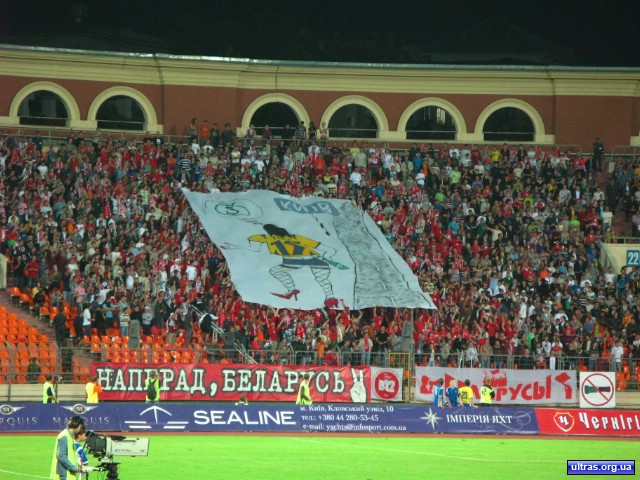 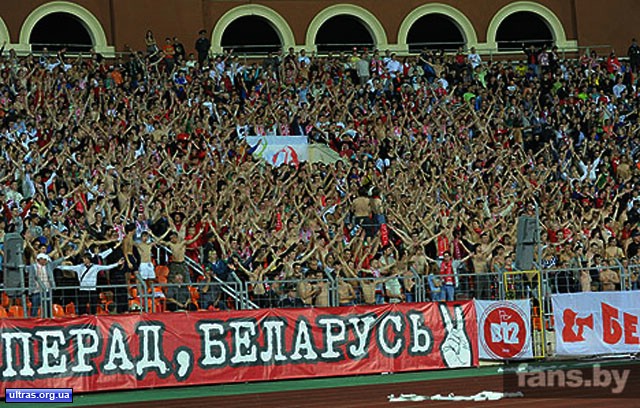 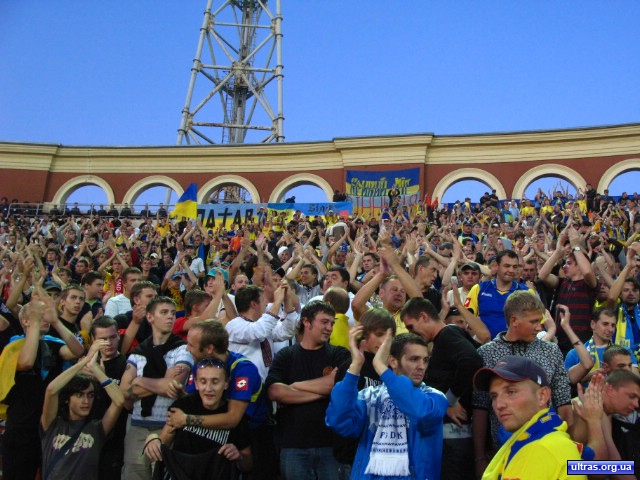 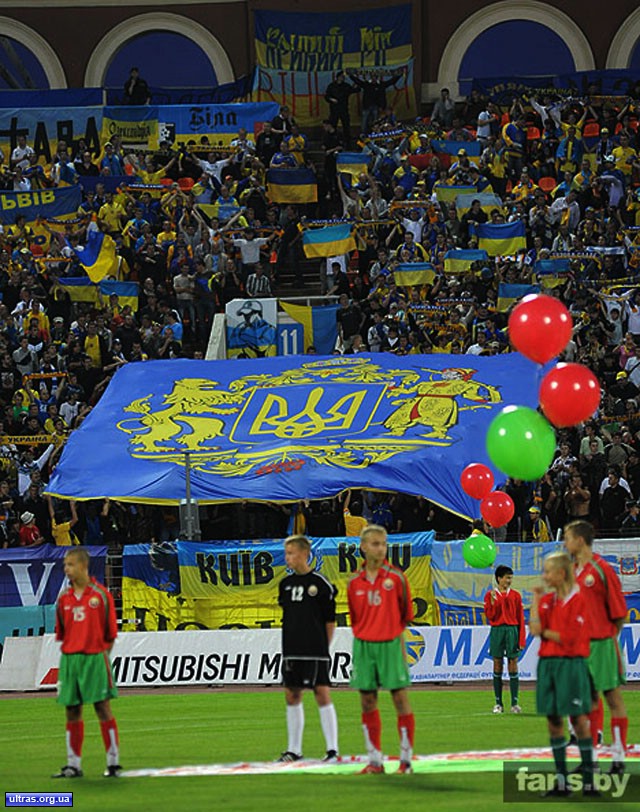 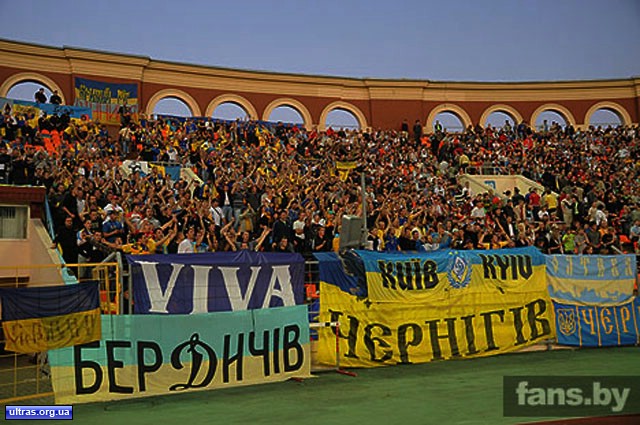 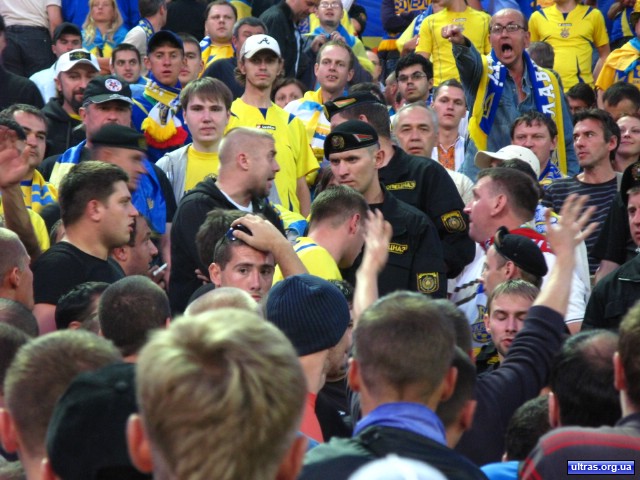 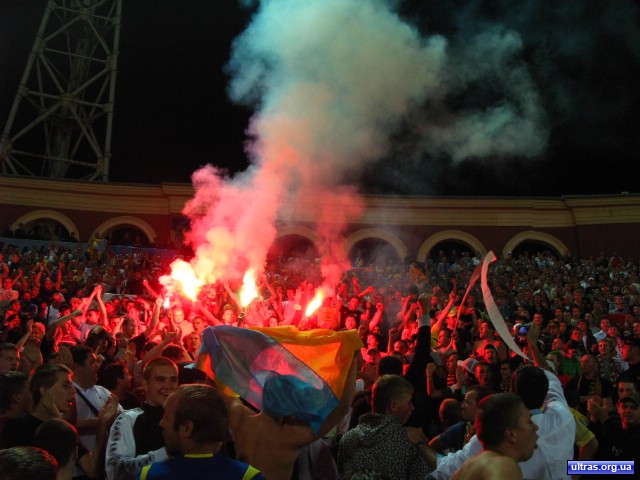 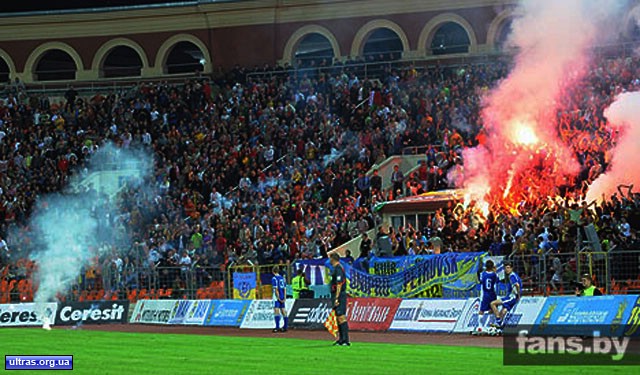