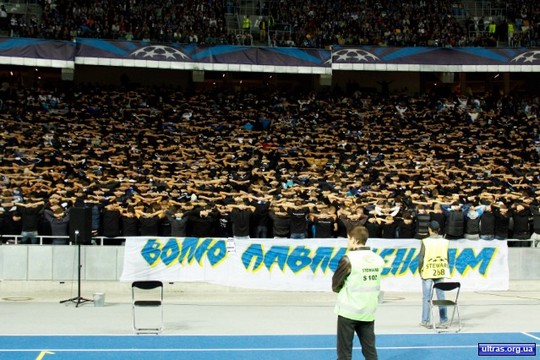 This trouble happened in Kyiv (Ukraine) with one of Dynamo Kyiv ultras, Sergiy Pavlichenko. He has judged to 13 years in the jail and his father got a life term without any proofs of their guilt. They are suspected in murder of magistrate with aim of revenge because this magistrate has thrown out them from their own house.

One and half year Ultras of Dynamo Kyiv support them and their family but the only thing we can do now is to support them with performances and demonstrations. The protest was supported by fans of all football clubs in Ukraine already...

Please watch this video, sounded by Pavlichenko the youngest. Press on CC to find subtitles in your language.

We are asking European football fans to support us, Ukrainian football fans and to join our campaign of "black tour" or "THEYARENOTKILLERS" as a sign of protest against judicial outrage. Please, keep coming to see football games of your team from November 16th to November 19th in black and hang out the banner in cyrillic script «ВОЛЮ ПАВЛИЧЕНКАМ!» and «THEY ARE NOT KILLERS».

And the most important thing is that we are asking you to approach your European member of parliament (text of address you can find here) to pay attention to this case. You can raise any questions to this campaign in comments to the video film, or send mail to This email address is being protected from spambots. You need JavaScript enabled to view it. Thanks to not indifferent people!

All details about Pavlichenko case can be found on  http://theyarenotkillers.com/

History of what happened:

1. The Pavlichenkos owned an apartment in the center of Kyiv.

* Gooyoord BV”, a Dutch company, begins to buy out all the apartments in the building, probably aiming to establish an office center.
* Pavlichenko refuses to sell the apartment, where his family lives, afterwards threats, intrigues, attacks and trials follow.
* For several years Pavlichenko litigates and does it successfully.
* One winter night a militia unit bursts into the apartment showing a default judgment (made in Pavlichenko’s absence) and starts to move out all the belongings as well as the family.
* The court decision was made by Mr. Zubkov, a judge of the Shevchenko district court.
* Pavlichenko starts to defend his rights applying for a revision of judgment, writing to members of the Parliament, giving a press-conference together with his attorney.

2. Killing of Mr. Zubkov and detention:
* In March 2011 Mr. Zubkov is found murdered at the entrance to his apartment. He was murdered by two people, one attacked him in the elevator, the other was expecting him on the floor with a gun. The attackers were seen by several people.
* Two days after Mr. Zubkov’s murder Dmitry Pavlichenko (father) and Serguei Pavlichenko (son) were put under arrest on suspicion of murder.

3. Investigation
From the very beginning the investigation is conducted with a lot of violations under publicly declared slogan “The Pavlichenkos are guilty”. Top officials address Pavlichenko, the elder, saying they know he is innocent, but offering him to plead guilty on the condition they would leave his family in peace, whereas he himself wouldn’t get a life term. Pavlichenko refuses to plead guilty for the crime he has not committed.
* Chief prosecutor has been substituted in the case. There is no direct evidence against Pavlichenko.

4. Court
* The trial lasted 9 months holding 1-2 sessions a month.
* First session was held in winter, temperature being -20 C. 300 people came to the court entrance to support the Pavlichenkos.
* From this first session a long trial begins during which all the mistakes and abuses of the investigation are disclosed. The case collapses-nobody has any doubts in the Pavlichenkos’ innocence including media people who are numerous and who sympathize with the defendants.
* All six witnesses declare that they do not recognize murderers among the defendants. Their testimony absolutely differs from militia protocols.
* Meanwhile documents of the case become the object of an additional study and it appears that the investigation does not have evidence to prove the Pavlichenkos guilt.

5. The verdict
* In autumn the court abruptly terminates the trial. At the last session all the arguments of the defense are discarded. Applications for additional study of the case material are declined “not to delay the trial”.
* Everybody believes in the Pavlichenkos’ release, but the judge reads the verdict for an hour and a half stating Serguei and his father guilty. Pavlichenko, the elder, gets a life term, Pavlichenko, the junior, 13 years.
*The verdict is full of false facts and distorted testimony, outrageous violations and falsifications of investigation.
* At the last match of the Champions League Dynamo fans did not hang their usual banners, leaving only one slogan ”Free the Pavlichenkos”.
*The protest was supported by fans of all clubs of The Ukraine Premier League.