FIFA has decided to penalize Hungarian football with fine and closed doors in the match against Romania due to "antisemitic" actions during a friendly match against Israel last August.

The World Cup qualify match against Romania will be played 22nd March. 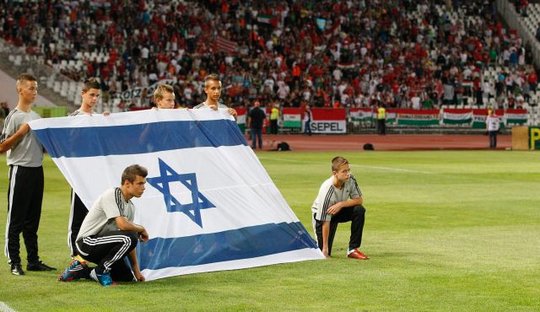 Here is a open letter to Sepp Blatter and FIFA representatives:

- These occurrences during the Hungary - Israel match which resulted in such irrational, and I must mention peculiarly belated and yet sudden decision making by FIFA, were committed by a small, secluded minority of supporters, and these actions, as always, should have been the responsibility of organizers to punish. Exactly since August of 2012 the Hungarian National Team's home-games are guarded by approximately 50 heavy-weight highly trained security guards in the central B section, whom have never been present prior to the above date mentioned. It is also their job to act during such an incident. It is not just, to burden the majority with sanctions, for those acts committed by a few! It should not be the burden of children and families, who visit these matches peacefully, to do something against these inadequately behaving few; however your punishment affects them as well.

- We consider the decision excessive and unjust, as the Hungarian National Team now unfairly has to suffer heavy sanctions in a most prestigious and important match, as a consequence of a case which occurred many months ago, during a friendly match…

- We consider it at the very least - odd, to receive a penalty in January of 2013, for something that happened during a match played in August 2012.

Now let us list some matches from the not-so distant past, where Hungarian fans, Hungarian people were attacked and abused and tormented with racist remarks and displays:

The local fans not only threw racist remarks, but hauled heavy stones at Hungarian fans. Albanian fans whistled during the entire Hungarian National Anthem. In the following video it is clearly shown that the Hungarian and Albanian sectors are placed right next to each other, with only a row of columns separating the two parties. Fantastic organizing abilities I must say!

After the Hungarian goal the Albanians threw stones, bricks, and beer bottles at Hungarian football fans, and set fire to the Hungarian flag. In protection of the Hungarian fans, their buses were protected by a single police vehicle. The convoy was then guided it to such a place, where the Albanian fans attacked the buses once again with heavy stones. The windows of the buses were broken, and two Hungarians needed immediate surgery. Were organizers competent? No! Was it a racist, hatred-driven act? Yes! Did you do anything? No!

Publications in the World media about this particular case were equal to zero, just as the sanctions ordered upon the Albanians by FIFA! Closing down matches from Albanian fans was not even taken into slight consideration. On the following page several reports are available about the case (the page is in Hungarian, but we are happy to translate if requested): 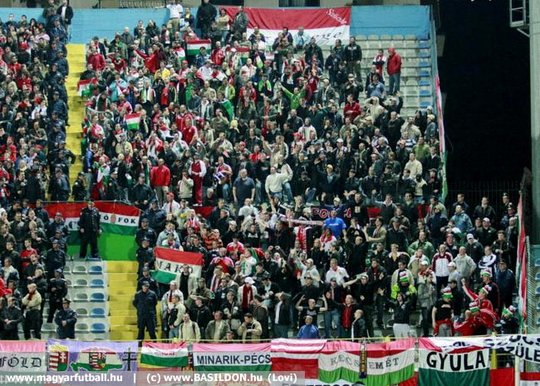 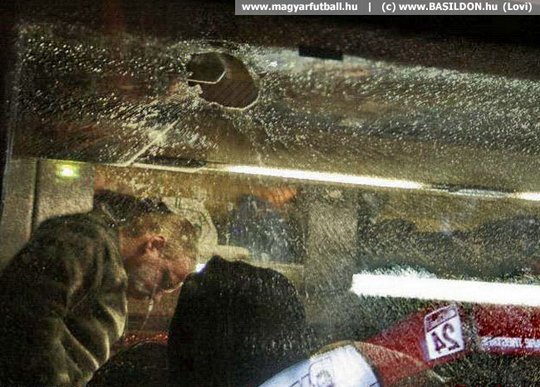 We wonder, what if something similar happened let us say with the Swedes, for example, in the Puskas Stadium, and Hungarians were the perpetrators... What a scandal that would be, no?

Here you find the YouTube link referred to in the above paragraph, regarding the inhumane abuse of Hungarians during the Albania-Hungary match on the 28th of March 2009:

For the Moldova - Hungary match the Moldavians made these “beautiful” displays: 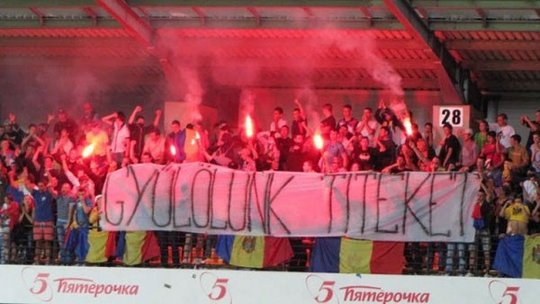 Where the signs mean the following: "we hate you", "shit Hungary", written in Hungarian for a more provocative effect.

The signs were held by not only a few, but at least a hundred, and the fans surrounding them did not protest against such shameless abuse. Whistles were prominent throughout the sacred Hungarian national anthem which by the way is written in the form of prayer, making an already immensely offensive and insulting act, surpass any comprehension by me, not only though, because the referee had to pause the match soon after due to a pyrotechnics being thrown into the middle of the pitch, and due to the breakout of a anarchy by Moldavian hooligans. 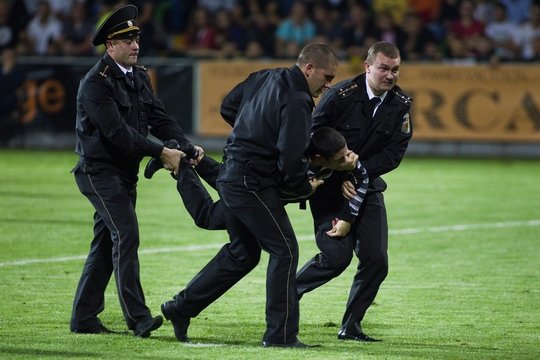 Were organizers competent? Not so..! Was it a racist, hatred-driven act? Most obviously! Did you make the next prestigious Moldovan match behind closed gates? No! Closing the match down from Moldovan spectators was, once again, not even remotely at stake!

The above stories are real, documented by videos, photos, and reports, even if they were not published in the mass media. Most likely though, the media would have been full of outrage if the same happened to the English, German or the Swedish teams.

In conclusion, I would like to highlight the fact that during all of the matches played by the Hungarian National Football Team during the past 100 years of football history, there have been no serious violations, though the same cannot be said about many other European National Football Teams, who survived regardless without any penalty or sanction given. We emphasize again that we disapprove any racism, and any type of Antisemitism, as well as the double standard, which now affects our Team, the Hungarian fans, and punishes Hungary in such a serious way due to ill decision by such a small minority.

We firmly ask you rethink your decision concerning the Hungarian - Romanian match by considering the reasons listed above. Please do not punish the peaceful majority of Hungarian football fans, an entire nation by stripping them of their free-will, if they so choose to want to watch the Hungarian-Romanian match live.