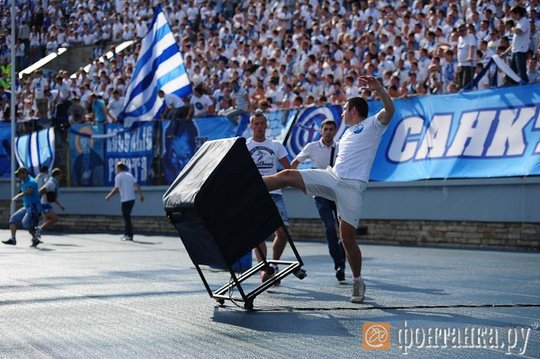 During the match against Lokomotiv Moskva Sunday 1st August, Zenit fans invaded the running track and turned off the speakers in front of their sector.

The speakers actually play random football crowd "noise" during matches. Stadium authorities use to turn it on when fans sing offensive songs, somehow they muffle sensible chants. Recently they started to use it when supporters sang the Zenit anthem.

When doing this authorities control the stadium noise people get when watching the match on TV.

You can also see in the video below Zenit and Lokomotiv fans sing together "Removed the loudspeakers".

Zenit also sang "NTV - Football killers". NTV is the channel that has the major rights for Premier League broadcasting, and as in many other countries TV channels decide what days your team will play. Mondays, early in the morning and more...