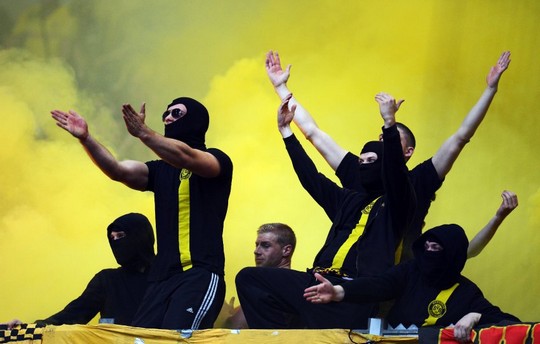 Dortmund revoked the so-called away season tickets belonging to the groups "Desperados," ''Jubos" and "The Unity" indefinitely, "but at least to the end of the season," after consulting police and witnesses for the derby, the club announced on its website.

Kick-off for the game at Schalke's stadium on Oct. 26 was delayed when some supporters lit flares releasing thick yellow smoke in the stand. Lit flares were then thrown at Dortmund goalkeeper Roman Weidenfeller on the pitch, after he approached to ask them to desist. Dortmund fans were also blamed for rioting before the game.

The club said investigations into the incidents were ongoing and that anyone found to have committed offences would be issued with a stadium ban.

"At present Borussia Dortmund expects that 20 to 30 persons will be affected by this measure," the club said.