17 year old FC Rad fan, was beaten and stabbed by police just before the Sunday match of Serbian championship between FC Rad and FC Vojvodina.

17 year old FC Rad fan, was beaten and stabbed by police just before the Sunday (31.11.) match of Serbian championship between FC Rad and FC Vojvodina in Belgrade. As boy has told the reporters, he and his 14 friends were approaching the stadium when they were stopped by the police and told that they can’t go to stadium in a large group because is "high risk" match. Police officers let the fans go 2 by 2 (every 200m). When boy realized they will be late for the match he started to protest and argue with cops. At this point cops forbid him to go to the stadium at all. But he took the bus to the stadium and when he took off the bus, the same police officers intercepted him and put him in the police van.
He was beaten by the police officers and in one moment a police officer took out the knife and cut him on several places over the body and stubbed him in thigh. Afterwards, not knowing what to do, police officers threw the boy out at the nearby cemetery and forbid him to move before they leave.
The boy was admitted to hospital Sunday afternoon with multiple injuries all over his body, stab wound in his left thigh and hematoma on his back. 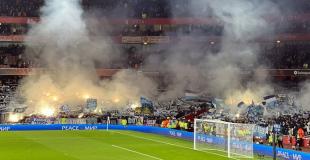 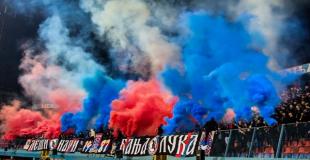