Everton fan gets Liverpool slogan tattooed across his back to help little boy. 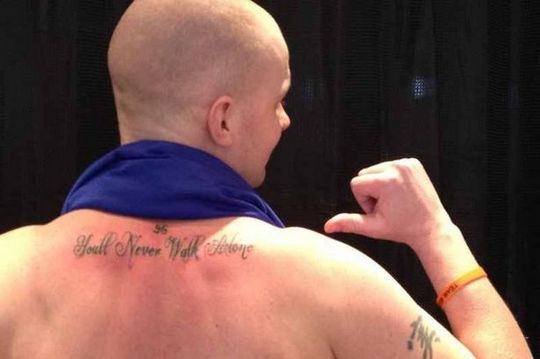 A lifelong Everton FC fan had You’ll Never Walk Alone tattooed across his back to support a boy suffering from a severe mystery illness.

Matty Bowman went ahead with the fundraiser despite his bitterness toward Liverpool FC , raising thousands of pounds to support the Team George appeal.

The money will be used to help toddler George Johnson go to America, where it is hoped progress could be made to diagnose and treat his baffling condition.

Die-hard Everton fan Matty, who used to live in Fazakerley , had the tattoo done in his hometown Ellesmere Port at lunchtime.

While he already has tattoos – including some showing his support for his beloved Everton – he said the newest addition hurt the most, mentally and physically.

After being “scarred” with the title of the famous Reds anthem, he said: “I did it, it went OK but it killed.

“It was really good and we had a few people turn up to watch, George and his mum were there.

“Mentally it was very bad. I didn’t look at it – I just asked them to cover it up. I think this was one that hurt the most because of what it was, and with it being on the soft skin by my neck.

“It hurt quite a bit but it wasn’t too bad, it lasted just over an hour.”

Matty volunteered for the charity effort after being touched by the story of four-year-old George, from Wallasey, who has to be fed through his heart because of his illness.

While a true diagnosis is still to be found, it is thought George is suffering from dysautonomia, a condition which affects the central nervous system causing major problems for the digestive system and the heart. 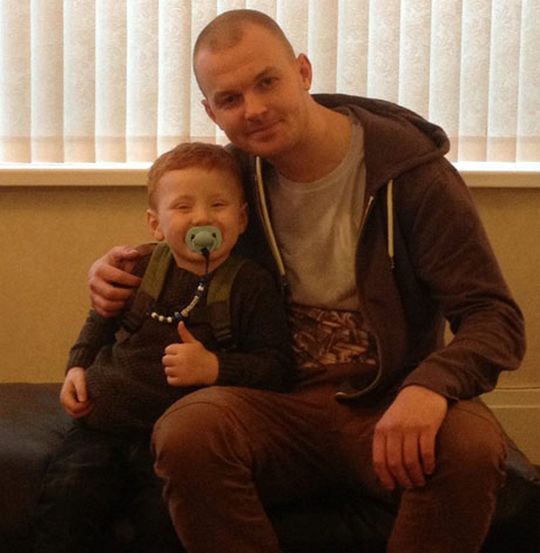 George's family are trying to raise £15,000 to take him to America where it is hoped progress could be made to diagnose and treat him.

Thanks to Matty’s efforts they are close to that target, and are now awaiting dates for an appointment with a US specialist who could help them.

Overwhelmed by the support, Matty, 26, said: “His mum has not stopped thanking me. We are going out for a meal next week as a thank you. If I didn’t want to do it, I wouldn’t have done, but I did it for a reason – it was for George, I’ve got a boy the same age.”

She said: “We are so grateful, it’s a gesture we would never expect anybody to do and the fact he has done it and put so much effort into helping George has been fantastic... we hope this is going to be life changing for George. It’s certainly been life changing for Matt. It’s a big deal and we are very grateful.”

For more information on Team George, and to donate, visit:  www.gofundme.com/teamgeorge