Last weekend will be reminded as one of the most remarkable moments of Portuguese Ultra history. 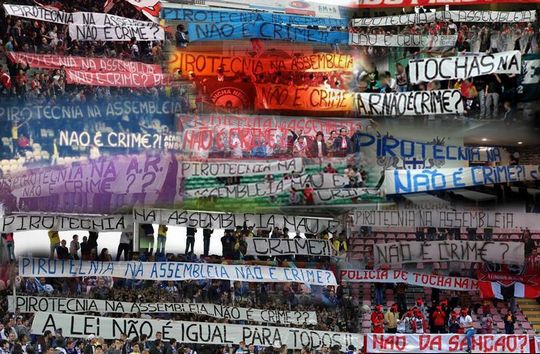 The weekend of 8-9-10th March of 2014 will be reminded as one of the most remarkable moments of Portuguese Ultra history. This was the weekend that all rivalries and hates were left behind in favor of one just purpose: freedom for ultras!

The main goal of this protest was to criticize the duality of criteria towards same situations. On the 6th of March 2014, Portuguese security forces gathered in Lisbon ( in front of Portuguese Parliament) in order to protest against the austerity measures that have been implemented in Portugal. During the protest several of pyrotechnic objects were used without any reaction of the anti riot police.
The main point here is not the criminalization of these actions during this protest, we don´t want that! The main point here, it´s the duality of criteria applied. Why I have to be judged criminally or have to pay a fine of 2000£  if I open a hand flare or a strob but if it´s the police to do that in the streets nothing happens?

In order to express our indignation towards this situation most of the Portuguese groups decided to show the same sentence during the weekend matches: ““Pyrotechnics in the parliament is not a crime?” .

Below we have the communication of "The Organizing Committee of the Supporters Association of Portugal" released yesterday:

Protest made by the groups of organized supporters is due to all that the country could saw live and in premium time. The people that chases, tries to ruin our (football fans) life that use a pyrotechnic device, using it on a manifestation against the actual government.

We say “Chases” because there are several cases that reaches the courthouses and end in a condemnation of innocent people that didn’t used pyrotechnic devices. They are several times accused in a total “arbitrary” and "randomly" way, for crimes allegedly committed, where the only proof is the word of the police against the defendant and they witnesses.

We say “Ruin our life” because in the severe economic crises that we face in Portugal, few are the persons that can pay a 2000€ fine and don’t fall into a fragile financial position.

We don’t put in cause, the right to fight for better life conditions, what we put in cause are the repressive and discriminatory laws applied to a citizen when he puts the football fan skin on.
How is it possible that in a so called democracy exist a law that can be aggravated if the act of triggering a pyrotechnic device is associated to Sports events. How is it possible that sanctions applied being higher than financial crimes or even suspicion of pedophilia?

The protest of this weekend was automatically repressed, a police charge in the SC Braga game, censorship not allowing the banners to enter the stadiums Vila do Conde, Estádio do Dragão, Estádio Da Luz, Setúbal e Paços de Ferreira and several others situations, like threats all of this by the persons that should protect us free citizens, on a free society were supposedly reigns democracy, freedom of speech and the right to protest.

Next matches of the Portuguese League we can expect retaliations due to this protest, the prohibitions of flags, banners and scarves on the stadiums. “Visits” by the police on the work place and homes. Anyway this way of fight is necessary and who knows maybe one of many, made by a large number of groups that in normal circumstances are rivals, in name of the well being of the Portuguese football.

Pyro is not CRIME not in here and not in the Parliament.
AGAINST THE MODERN FOOTBALL

The Organizing Committee of the Supporters Association of Portugal.