Blue Saints supporter group, as the first choreo say, were founded in 1981. They took the name from the song they used to sing, and still sing, "When the saint go marching in". Before the season in 1997 they changed their name to Järnkaminerna (Name they called the team from the 50`s) because the name Blue Saints in many years were associated with violence and "Terror Tommy" from 1995.

Because they were associated with this kind of bad behavior their club had problems to get sponsors, as well as very few normal fans attended their matches.

Djurgården do also have a own group for Tifo and a ultras group.

The Tifo-group is named Fabriken and the ultras-group is named UCS (Ultra Caos Stockholm). All 3 groups work together with Tifo and other supporter related stuff. UCS were founded in 2003 and Fabriken in 2005. Before these groups started "Ultras Stockholm" stood for the Tifo, but they stopped their activity in 2003. 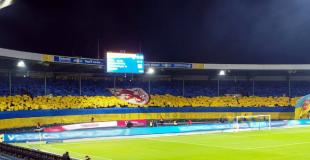