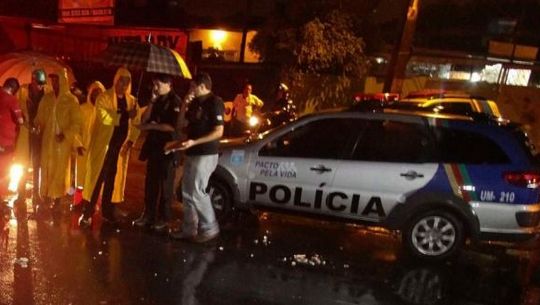 A football fan was killed in one of Brazil’s World Cup host cities after being struck by a toilet bowl thrown by rival fans during a post-match brawl on Friday night.

The latest outbreak of football violence in the country took place in the north-eastern city Recife during a second division match between local team Santa Cruz and Paraná. Video shown on local television showed two toilet bowels thrown from an upper tier onto a group of fans involved in fighting as they exited the match. One struck Paulo Ricardo Gomes da Silva (26), who died at the scene.

He was a supporter of Santa Cruz’s local rival Sport and had been at the game supporting visiting team Paraná. Witnesses said Santa Cruz fans clashed with Sport and Paraná fans at an exit throwing fireworks with unconfirmed reports of gunfire.

The violence took place at Santa Cruz’s Arruda stadium which is not being used to host Recife’s five World Cup games, the first of which will be held on June 15th when Japan play the Ivory Coast. Brazil’s football authorities ordered the indefinite closure of Santa Cruz’s ground.

There was more football-related violence on Saturday in Natal at a test event for the city’s new Arena das Dunas, which will host four World Cup games. Over 40 fans were held after clashes between supporters of local rivals América and ABC before the game.

Rocks and other objects were thrown when groups of rivals fans ran into each other on the way to the stadium. Fans then attacked police after they intervened.

Over 230 fans have been killed in football-related violence in Brazil during the last quarter of a century.