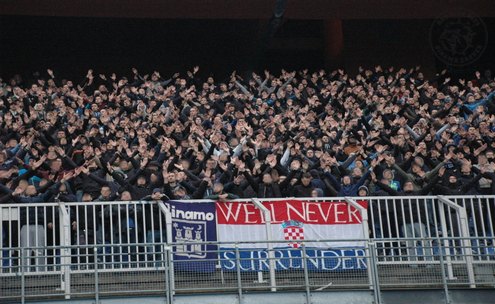 On match vs Osijek (26th October) Bad Blue Boys returned to North and mercenaries went on West. Big police presence on that match, no incidents.

On Monday BBB officially announced they will also come on European league match Dinamo - Red Bull Salzburg. Immediately after that, Dinamo decided to ban ALL BBB who were on match vs Osijek (around 800 people). Reason? They were singing offensive songs... There is a so called "black list" made by Dinamo with now more than 1500 names that can't enter Dinamo's stadium Maksimir. You can get on that list just because you sat in wrong section, sang against Mamić, drank beer near stadium or other ridiculous reasons... Of course that rules are applied only on BBB members, fans on other tribunes don't have problems like that.

Some BBB, who bought tickets for match with Red Bull before club gave ban, also couldn't enter stadium. Around 300 members of BBB gathered in a park near the stadium before yesterday's match, quickly police surrounded them and none could leave or enter the park.

Bad Blue Boys are currently most repressed group in Europe because they fight against most powered man, Mamić,  in Croatian football. Mamić is the leader of Dinamo Zagreb now days. They can't enter their own stadium, they cant get tickets for European away matches (sometimes they cant even enter city)... but they still don't give up and fight, big respect!