England: Crystal Palace fans with protest outside the Premier League headquarters in London.

England: Crystal Palace fans with protest outside the Premier League headquarters in London. 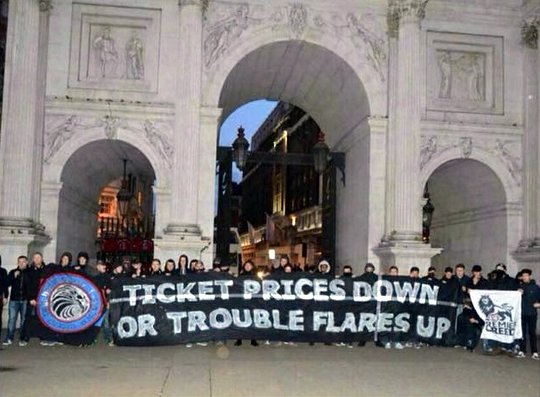 Saturday 20th of December the ultras group Holmsdale Fanatics, fans of Crystal Palace, had a protest outside the Premier League headquarters in central London against the continuing rise of ticket prices throughout the country.

In addition to this a letter was handed over addressed to Richard Scudamore, the Chief Executive of the Premier League:

Today’s protest was a direct result of the anger and frustration felt by football fans across the country, a feeling that has been growing over the past few seasons as a consequence of the continuously alienating ticket prices that permeate this league. For too long now the cost of following your football team has been on the increase whilst at the same time the atmosphere that once made our stadiums famous across the world has all but vanished, the soul removed from the sport and the working man driven away from his own game.

Today we wanted to be following our club away at Manchester City, however yet again we have been denied this privilege due to the cost, a situation well known by fans of many teams who weekly have to deal with the disproportionate prices involved in following their club.

The creation of the Premier League and subsequent international marketing of its brand, along with the billions of pounds poured into the game via pay-per-view TV, has led to the pricing out of the working class and the move towards a corporate, money-driven game all but complete. Tickets for our match today were equivalent to a day’s pay on the minimum wage - in what world can a man spend a full day's wages on a match ticket alone whilst still having travel, food and beers to pay for on top? Football without fans is nothing, and those who give the most to support their teams are being pushed away from the clubs that have been handed down to them from father to son, generation to generation.

We regret having to mask our faces today, but in a city of unprecedented CCTV coverage, a government overseeing an era of restrictions on protest without prior notification, a police force that has run amok with Football Banning Orders all backed up by a court system that can hand them out without criminal conviction, you can excuse our paranoia.

There have already been supporter-led actions against ticketing prices both inside and out of stadiums across the country and newfound sense of unity amongst fans who are willing to come together in order to stand against that which is preventing them from following their team. This action represents the first from our group outside the stadium and the continuation of the mobilisation other supporter groups up and down the country to take direct action on behalf of all priced-out supporters that will no longer be ignored.

This is a rallying call to football fans of all clubs, ticket prices have gone beyond crisis point, the loyalty that has been shown by us to our clubs has been spat back in our face. The knowledge that we will follow our team throughout the good and bad used against us and we are being driven away from our stadiums by those who govern our sport. Enough is enough and now is the time to act.

If you would like to arrange a meeting to discuss ways of ending the exploitation of supporters please contact us on [deleted].

Flares were used when members of Holmsdale Fanatics marched in the streets of London. 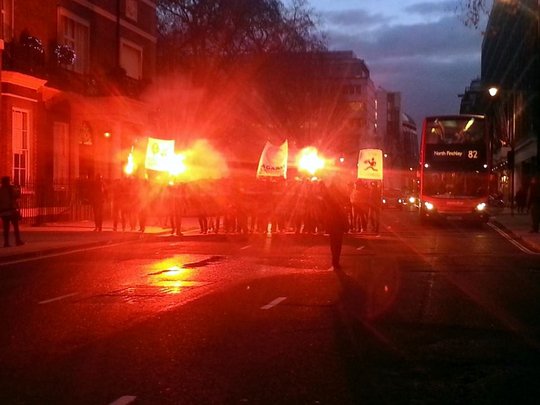 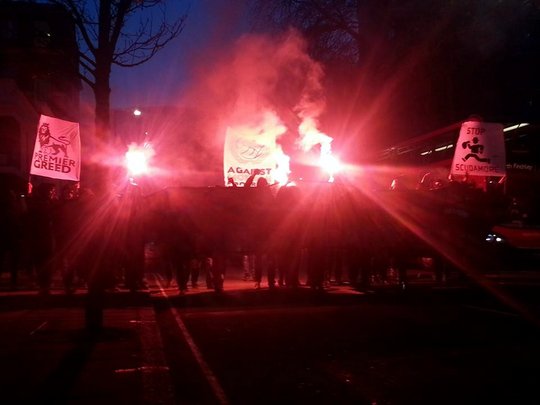