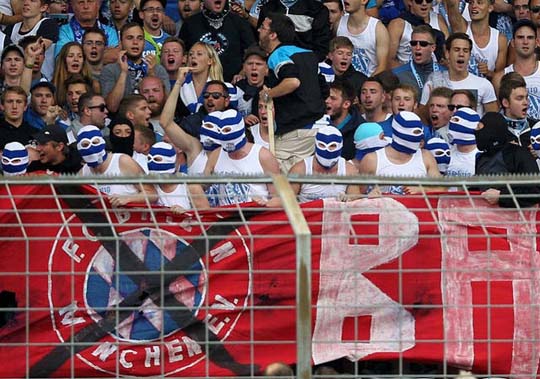 A German judge ordered two football hooligans who attacked a fan of a rival club and tore off his team gear to take the "painful" step of buying him new Bayern Munich merchandise, media reported Wednesday.

The judge in the southern city of Munich, Karin Jung, told the daily Bild that she presented the defendants, both supporters of the 1860 Munich team, with the choice of replacing the Bayern Munich gear or serving 15 months in jail.

The men chose a shopping trip to the Bayern Munich fan store, a decision that was "really painful", Jung said with satisfaction.

The two defendants, who were accompanied by a third man, accosted the Bayern fan at Munich's main railway station after a match in August 2014 and ripped off his jacket, shirt and straw hat, which were emblazoned with the team's logo.

"The two accused seemed pretty cocky, showed no remorse, did not confess and refused to name the other assailant," Jung said.

"I wanted to show that football is football and not a battlefield," she said, explaining her unusual ruling.

With the consent of the victim, Jung said she went for an eye-for-an-eye judgement.

"I thought about what would be really painful to them, and doing something like this really bothers this type of people," she said.

The defendants' lawyer, Guenter Reisinger, said his clients had apologised to the Bayern fan and paid him 500 euros ($543) each in compensation, in addition to buying a hat, scarf and jersey from the team shop.

The gear was to be handed over to the victim on Wednesday in court.

"They are not the kind of hardcore fans who would rather go behind bars than into a Bayern shop," Reisinger said of the ruling, which Bild called "curious and clever".