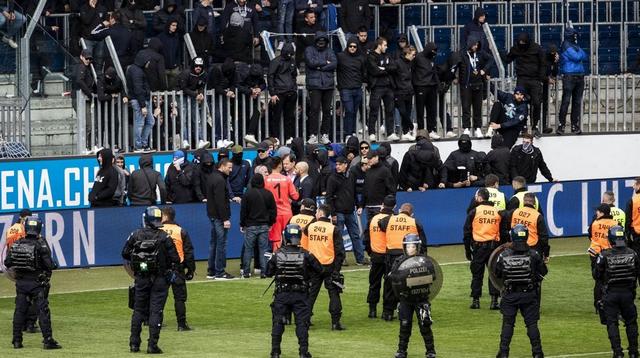 Grasshopper Zurich fans demanded players hand over their shirts as they forced their team's match to be called off for the second time in two months on Sunday in protest at the impending relegation of Switzerland's most successful club.

The 27-times Swiss champions were losing 4-0 at Lucern, a result which would have condemned them to relegation after 68 uninterrupted years in the top flight, when their fans threatened a pitch invasion.

Several dozen fans moved to the front of the terraces and threatened to storm the pitch as they faced off with a line of stewards and riot police.

Players and club officials went over to speak to them and, according to Swiss media, the fans demanded the players hand over their shirts and shorts as they were not considered worthy of wearing them. Some players eventually went over to the fans and handed over their shirts. Play was abandoned after a 15-minute wait.

The Swiss league's disciplinary commission will now have to rule on the outcome of the match as the result has not been declared official.

The most likely outcome is that Grasshopper, winless in their last 17 league games, will forfeit the game, confirming their relegation to the second-tier Challenge League.

Fans had previously forced a match at Sion to be called off after throwing firecrackers onto the pitch when their team were losing 2-0.

VIDEO CAN BE SEEN HERE