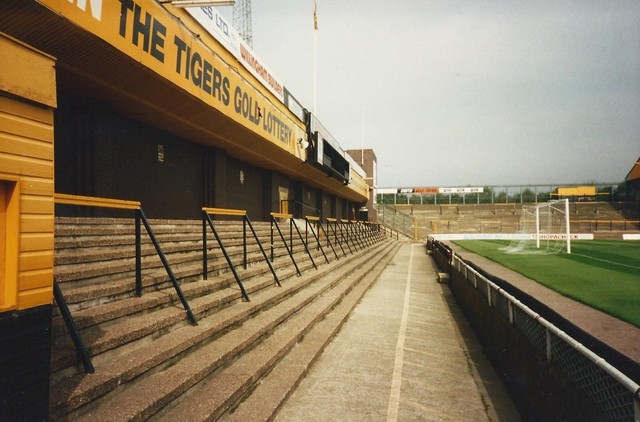 Football stadiums these days are all about being ‘fan friendly’ and cater more to people in VIP boxes chowing down on prawn sandwiches and caviar rather than fermenting an atmosphere that will have the opposition quaking in their boots.

However, there are some stadiums around the UK which lay dormant or abandoned, full of the ghosts of diehard fans who refuse to let go of past glories earned out on the pitch and in narrow back lanes and dingy car parks.
Here we take a look at some of the disused but not forgotten football stadia, which fans around the UK still tell long tales about to this day.

Ask any Leeds fan about away days that had them spooked and many will talk of the streets and establishments that were dotted around Boothferry Park – the home of Hull City or The Tigers as they are known.

The stadium was the club’s home from 1946 till 2002 when they moved to the sterile and soulless KC Stadium, next to the city’s famous fairground. Boothferry Park’s East Stand was where the club’s hard core supporters congregated, as close to the exposed away end as possible. The West Stand was the only one that provided seating and the South stand was a huge bank of terracing which once helped the stadium pack in record attendances of over 40,000 people.

During the 90s the club fell on hard financial times and the team were even locked out of the ground by former club owner David Lloyd, who said the club owed him rent. In the end the team had no option but to move to greener pastures. Little remains of the stadium today, as Hull battle for survival in the Championship.

This is another team who are among the odds-on favourites for the drop in this season’s Championship, after they were deducted points for falling into financial troubles. Indeed, they may find themselves and Hull appearing in many online tipster columns as teams to hedge against consistently throughout the 21/22 campaign.

But once upon a time Derby County were the regulars in European competition, using their beloved Baseball Ground and its mud pitch as a stomping ground, where they could grind down and frustrate even the best teams on the continent. The Baseball Ground was still used by the club’s reserves up until 2002 but was then demolished at the behest of property developers. The club’s soul took a major hit in the process and not even Wayne Rooney’s managerial genius is likely to save the club from being condemned to relegation by online betting tipsters and media pundits alike. The glory days of the Baseball Ground seem like a very distant memory.

Kick offs at these grounds are a thing of the past, but those of bygone eras still live on in the memories of diehard fans

Millwall are a club synonymous with fans who are incredibly territorial and look after their own, which is part of what always made a trip to the original Den one of the most intimidating experiences in football. Lots of fans from rival clubs flat out refused to make the trip to South London, such was the reputation that had been built at The Den.

This allowed the club to punch way above its weight for years, a tradition that has been carried over to the New Den, which was opened in 1993, and is situated only a mile away from its predecessor. Despite the new stands and facilities, a trip to the deep south still means as much today as it did back in English professional football’s formative years with the ground and its supporters being immortalised in movies like Football Factory.