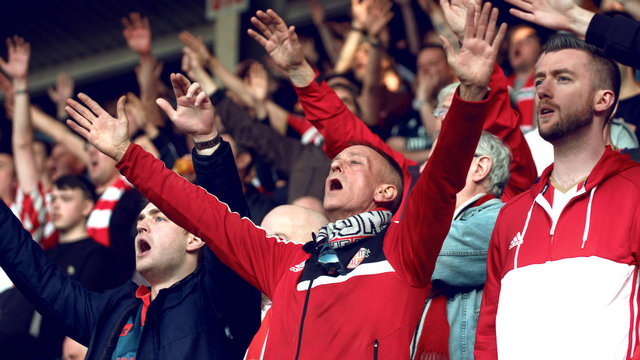 Football, like many sports, is full of changes. Players and coaches come and go. Sometimes club ownership changes hands. But one thing that remains constant is the support of fans.

Usually, football fans show support to their clubs and players by attending matches, forming tifos inside and outside the stadiums and purchasing merchandise. Although not always appreciated, support by ultras has helped some times overcome all odds to achieve their seasonal goals.

Here, we’ve highlighted some amazing football documentaries that wouldn’t exist without the support of ultras like you. Let’s dive right in.

Do you believe in miracles? If you do, you’ll enjoy Sunderland 'til I Die, a documentary about the Black Cats’ fall from the premier league. The eight-episode documentary dives into the club’s relegation to tier three of English football in 2017.

The best part of Sunderland till I Die is that it displays raw emotions from local fans. In all fairness, Fulwell 73, a video production company owned by Sunderland fans, created the documentary for Netflix.

The short film opens with a short prayer session at the St Mary’s church. The prevailing priest makes a player for God to give the club’s players “self-belief and a spirit of confidence because the success of our team leads to the success and prosperity of our city.”

The priest wasn’t exaggerating, though. Sunderland’s success had creating hundreds of jobs to the locals. And the jobs dwindled after its exit from the premier league. For the most part, Sunderland till I die describes the frustrations of fans all while hoping for a better future for their club.

Arsenal legend Thierry Henry sums up Take the Ball, Pass the Ball documentary with this line, “If you tell me that you love football and you don’t love Barcelona you have a problem.” Now, you don’t have to agree with the Frenchman.

But you must agree Pep Guardiola’s achievements at Barcelona are remarkable. Pep won 14 major trophies in a four-year span in Spain, leaving one of the best legacies in club football.

Take the Ball, Pass the Ball showcases Barcelona’s transformation from 1998—when club legend Johan Cruyff became the club’s manager. It credits him for initiating El Rondo, the quick-passes style of football common today.

Guardiola capitalized the strategy on his all-stars team that included Lionel Messi, Andreas Iniesta, Xavi, Dani Alves and Thierry Henry. While the documentary displays the team’s superior talent, the major focus is on Guardiola—how he prepares for matches, his philosophy and greatness.

Of course, Take the Ball, Pass the Ball also hails praise to Messi, especially the comments of his teammates and his top highlights.

Borussia Dortmund is synonymous with the Yellow Wall. But in their documentary, Inside Borussia Dortmund, the main focus is on the club’s performance in the 2018/19 season. It’s a four-part series that talks a bit about the aforementioned season.

It also delves into the history of the club, iconic tifos from fans, star players and key people in the club’s management. There’s a caveat: you need subtitles to experience the film properly unless you speak German.

Overall, Inside Borussia Dortmund is a great football documentary to watch for every sports fan. That includes people who love to bet on German football and those who play football themed slots at Casinos ohne Lizenz.

#4: All or Nothing: Tottenham Hotspur

The documentary begins with the departure of former manager Mauricio Pochettino. It was a sad goodbye for a man who created great memories for the club. Ultimately, the UCL loss to Liverpool and a 7-2 thrashing by Bayern Munich made things a little bit easier for Tottenham to let go of Pochettino.

The focus then shifts to Jose Mourinho, the then new coach, whose appointment drew sharp criticism from a section of Spurs’ ultras. All the same, the documentary features interviewees hailing praises at Mourinho.

It also talks more about the Portuguese’s tactical prowess, his ability to inspire players and trash talk opponents. On the flip side, All or Nothing features several players and their stories. That said, the documentary fails in showing Spurs’ shortcomings, attracting criticism for sounding more like a PR stunt rather than a true documentary.

#5: Orient Club for a Fiver

Club for a Fiver is one of the most famous football documentaries in the UK. It chronicles the journey of Leyton orient during the 1994-95 season. It’s a chaotic, insanely memorable and quotable documentary that does everything to show everyone’s true feelings about the club.

Club chairman Tony Wood is quoted saying he could sell the club for five quid. On the flip side, co-managers John Sitton and Chris Turner are shown expressing varying feelings that ultimately influenced their post Orient future.

The documentary reaches a low point when Sitton gets into a one-side war of words against his players. He starts by insulting defender Terry Howard before challenging two other players to a fist fight.

And that’s not the end. Sitton calls these players all sorts of unquotable names, which led to his firing at the end of the season. While this documentary is difficult to watch, it’s raw and honest in describing the club’s dismal management at all levels.

Before Manchester City became the successful club it is today, it was struggling for years. City! A documentary about the club in the 80’s sums up their struggles. The documentary story starts with the club at the bottom position despite investing eight million pounds in new players.

The then manager, Malcolm Allison, had been their coach since the ‘60s. And he had delivered lots of football glory to the club. In the ‘80s, however, City were a club shoveled around by random teams.

The board finally fired Allison and the board members seemed happy about their decision. His successor, John Bond, surprisingly, praised his predecessor at every opportunity. It’s a great authentic documentary where everyone talks their mind, good or bad.