Check what you will find in the newest issue of ultra magazine “Saturdays Heroes”. 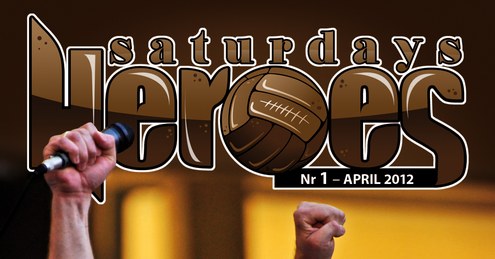 Check what you will find in the newest issue of “Saturdays Heroes” (80 pages, full colour!):

BEAST FROM THE EAST

History of Polish hooligan movement!
“(...)In such conditions of increasing level of aggression, in the 90’s, a modern hooligan movement was born at stadiums in Poland. While fans from many European countries drew inspiration from the Italian “ultra” style, Poles were fascinated by the hard, violent, English style. "Hooligans" captured the stadiums! Many fans/hooligans were also skinheads, so heavy Doc Martens, bald heads and flyer jackets (often reversed on the orange side) dominated the sectors of most ardent fans in those times. (...) Fights usually broke out at the terraces, but hooligans were also arranging numerous ambushes on a opposing group traveling by train (which was the primary mean of transport to away games). Typically, a train with hostile fans was boarded by a “kamikaze”, who at the agreed place pulled the emergency brake. Train stopped, and then hooligans lurking nearby, began the attack. As a rule, they firstly threw stones and smashed most windows in the carriages, then tried to get on the train (if the victims panicked, it was very easy to beat them practically without losses) (...)”.
(Huge article – 20 pages (!) with 54 bloody photos from 1995-2010!) 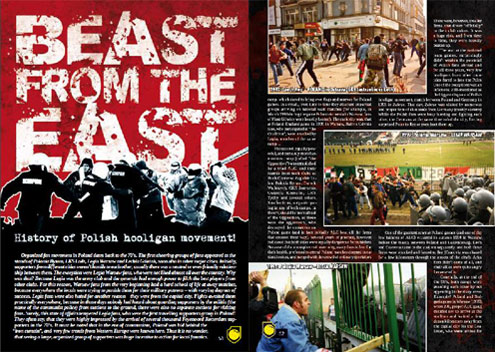 TORCIDA – A BRAZILIAN WAY OF SUPPORT
We talk with the Brazilian Gabriel Uchida, football fan, journalist and terrace-photographer, enthusiast of spontaneous, Brazilian ultra movement. This interview is decorated by phenomenal photographs, made by Gabriel. You have to read, especially if you want to learn more about Brazilian football fans!

“ULTRAS RAPID” PROBLEMS
After last year's derby of Vienna, unfinished due to the massive invasion of Rapid fans onto the pitch, the ultras of this club had a hard time. Firstly, "Ultras Rapid" suspended their activity, but in the spring 2012 they returned to the stadium. Oliver, a long term leader of the “Ultras Rapid” group, tells us about the current situation of Rapid Vienna fans.

“ZABRANJENI” - PARTIZAN BELGRADE
“(...)It all started at the beginning of second round of last season, we couldn’t accept some things and finally our revolt started. Alcatraz used to cooperate with police (...) We would like to bring the old school climates at the South Stand, no pussies, but brother next to brother, one for all and all for one. Since the conflict has began, there is less and less people in our once glorious section.(...)”

ZALGIRIS VILNIUS “PIETU IV”  - “FAITH THAT SURVIVED”
The oldest and largest ultra group in Lithuania is "Pietu IV". It exists for 27 years now, and actually the first fans in green and white scarves appeared in the stands even earlier, in 1980. We present a conversation with Storas, the undisputed leader of the firm, a witness, and later an active participant in its development from inception until today. The conversation starts in the days of the Soviet Union, when the history of “Pietu IV” began...

LADS `82 - DINAMO MINSK
“(...)L82 was established in 2004, following merging of the firms "Patriots" and "Capitals Legion", at the same time it was also joined by many new boys. At the beginning we were oriented to compete with firms from Europe and Russia, as in Belarus, we practically had no proper rivals. (...) You want to break your life and career in a second? Join us! Sooner or later you will understand your place in this country and come to the conclusion, that it is better to live out of this system, like we do, than to be a tiny screw in all this. And although in the past years many of our young boys felt the burden of life and went to jail, we don’t give up and move on.(...)” 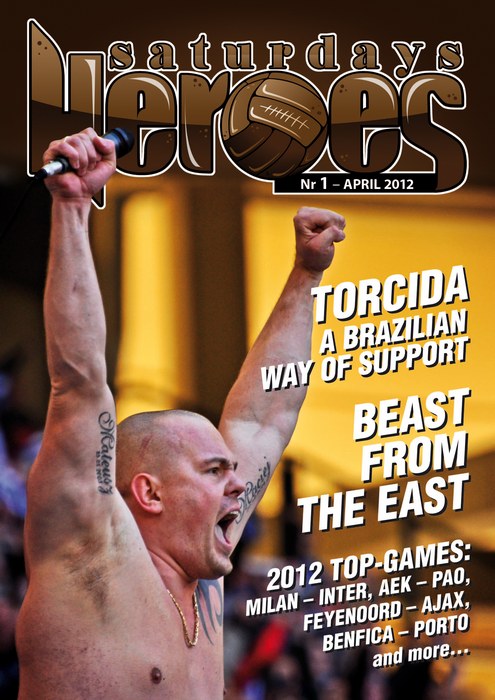 DUNDEE UTILITY
We would like to invite you to a series of articles on Scottish hooligans firms. In this issue, you will meet a team quite strange and characteristic, as the hooligans of both clubs from the city of Dundee (United and FC) are united in the same firm, "Utility":
“(...) In 2007, Dundee FC, played at home a friendly match against Millwall. To meet the Bushwhackers, we gathered around 90-100 people, and it was a kind of achievement, considering that for the last 3 years we have failed to mobilize more than a dozen people. Firstly we tried to attack them before the game, in the city center and after the match, 20 hooligans from Utility firm made a kamikaze-style action and charged whole Millwall contingent, marching in full escort to the railway station.(...)”

FOOTBALL FANS IN ULSTER
“(...) At the end of the 70’s Linfield’s “Section F” firm was created (it took name from the home end at Windsor Park). Generally, the situation can be compared to that in Serbia, where Arkan recruited his "Tigers" at Maracana in Beograd. In a similar way, UDA and UVF (Ulster Volunteer Force), acted at Glentoran or Linfield terraces, and the IRA (all of its branches) at Cliftonville.
In the 80’s and 90’s, major riots broke out during games between Linfield and Glentoran, the two clubs, supported by Protestants. Fighting took place both at the LFC stadium, and at The Oval (home of GFC).(...)”

NORTH AMERICA ULTRAS
“(...) In 5 years, I think the Ultras mentality will have spread well throughout the entire league. Its a slow process, but it is moving. People have to remember that this is a very new type of culture here in North America. People here are used to going to sporting events and sitting down and clapping, but it is slowly changing here. (...) In Canada, there are very, very strict laws on the use of pyro, and there are large amounts of police at each game in Toronto. In the USA, the laws aren't as strict, but it's still very risky to light pyro.(...)”


Price is 3.90 euro. All details on official web site http://sheroes.eu/