"Monsters", group from
Larissa in Greece had
demostration against
New law. When ‘Monsters Larissa Club’ decided to take place in a Union consisted of many Ultras Clubs in Greece, about 4 years ago, we had in mind that one of our basic goal would be the fight against the state’s absolutism in legal matters. When the government voted in one summer night the familiar now as ‘new athlete law’, abrogating the possibility of reprieve or payment of penalties for persons accused of athletic violence, we had in fact to face a strong and sly beat against the constitution of our country and the principles of democracy itself. We proposed many times to Greek Ultras Union to concentrate against this basic problem not only by hanging our banners condemning this illegal law, but also finding more impressive ways to make it known to all citizens. After a long period of very slow evolutions on that, we took the decision to do something all alone: we decided to remain out of our stand for 10 minutes of the duration at the game against Iraklis Thessaloniki on the 2nd of March 2008, and then come in our gate having only banners against the law.* We proposed the same to many other Ultras Clubs but none of them did so… This was, at the same time, the end of our participation in the Greek Ultras Union: it still exists in the same neutral way… When the news that this season’s All Star Game would take place in Larissa caressed in our ears, we made the willing decision to arrange a demonstration. It would be a good chance to spread our voice against modern football. We bought white masks, painted a 30 meters long banner with the same story of a fan celebrating his team’s goal with a torch, when caught by the camera eye, arrested by the police and driven straight to jail, and we called the people to take place in demonstration. About 400 fans paid the ticket for only a few minutes (basically members of our club) to have the chance to shout against this unfair law, wearing our white masks. Some of our members entered in our gate wearing handcuffs and stood across the stand in front of others and the banners, keeping the hands up high all the time. We all shouted against the law during the whole penalties competition before the game, we did the same thing louder until the 17’ of the game and then we left altogether emptying our stand. As it was expected, the media did the best they could NOT to make it important and generally ignored it: a civilized way of protest with no blood of violence never sells. But we promise to all of those little monkeys of fake legality and pseudo tuxedo dignity, that we will not easily give up our fight.

Videos from our protest: 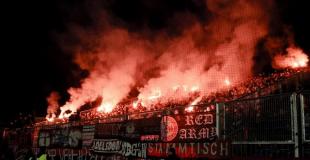 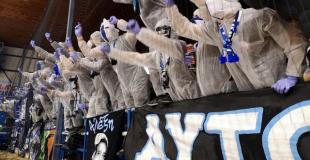