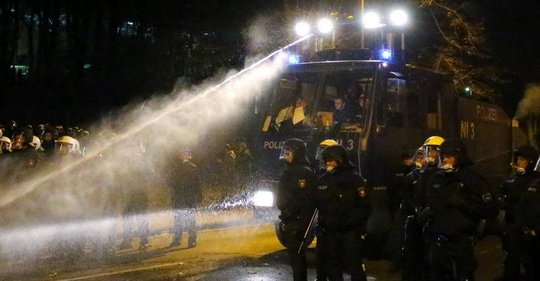 37 years since the last "Lower saxony derby between there two rivals. 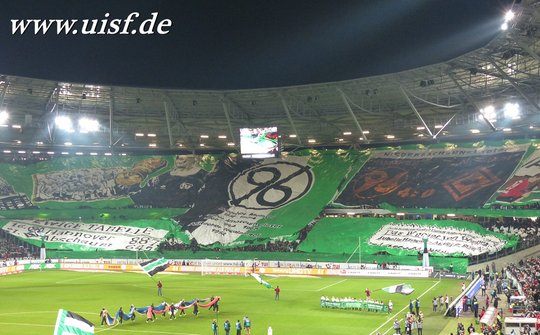 Hannover and Braunschweig used to be to different states but in 1946 both where merged into Lower Saxony. The hate between the two cities goes far back into the middle ages and is now present especially in football.

Since the last derby was in 2003 in German Cup the match aggregated huge attention. Several weeks before the derby there was some minor incidents between the two fangroups to provoke the enemy. It included graffiti in the other city and on trains, crosses around Braunschweig or a pig with a Hannover scarf in the city of Hannover.
Police was very alarmed and put together an army of 2000 policemen, two helicopters, several water cannon trucks, armored vehicles, police horses and dogs.

Even the night before the derby some 100 policemen where present in the city. On match day the hooligans and ultras where meeting at noon in the old city. The situation remained calm throughout the day, but escalated quickly when the sun went down.
The different mobs of ultras and hooligans united into a march, police said there where about 1500 ultras and hooligans now marching towards the stadium. Some police forces were attacked by the Hannover fans, but police acted very calmly.

As the fans arrived at the stadium they immediately attacked the police forces, trying to get through to the Braunschweig fans. Police withdraw but two police cars couldn't escape and where destroyed.
At the same time the stadium entrance was stormed.
Later the water cannon was used against some minor fan groups remaining in front of the stadium.

Braunschweig was traveling to Hannover with several extra trains, who headed to a little local train station in the near of the stadium. The fans where shooting pyro and throwing pigs heads when arriving in Hannover.
With huge police force Braunschweig was escorted to the stadium where one water cannon truck was standing, but not being used. There were some incidents with police because Braunschweig fans tried to storm the stadium.

Inside the stadium Braunschweig ran into their sector lighting some flares, and showing their group anti Hannoi banner.

The north stand of Hannover presented a huge choreo. At first 12.000 flags in black, white and green where waved, then banners covering the whole tribune was raised. After the banners went down, everybody was wearing a poncho in either black, white oder green. 600 Fans where masked from this moment and didn't change that during the game. That obviously was for pyro use and that banned fans could watch the game. Throughout the game pyro was used every few minutes, with bigger action at the beginning of second half.
A tracer bullet was shot at a Braunschweig player at the first corner kick.

Braunschweig also had a minor pyro show with some tracer bullets shot onto the pitch. In 67th minute the presented a banner of a Hannover fanclub, as well as one two stick and burned both.
In the same moment Hannover displayed maybe 50 scarfs, little flags and jackets from Braunschweig. Also a big flag was torn into pieces.

After the match I saw big groups of Hannover fans running through the city, building barricades, attacking the police and general rioting. Apparently they tried to storm the central station. 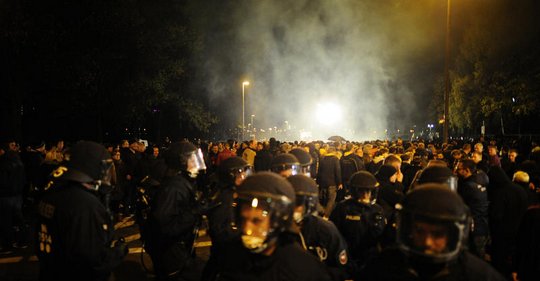 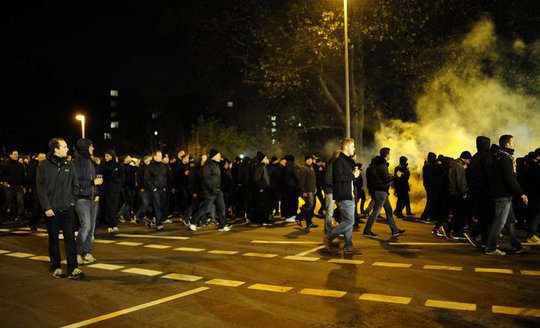 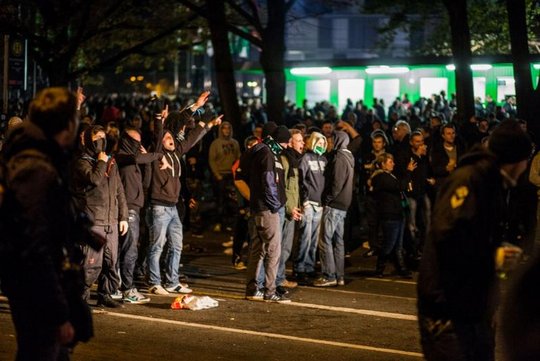 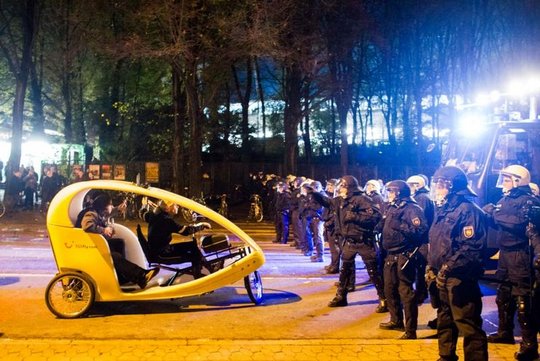 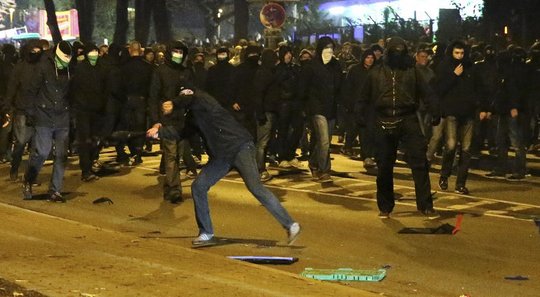 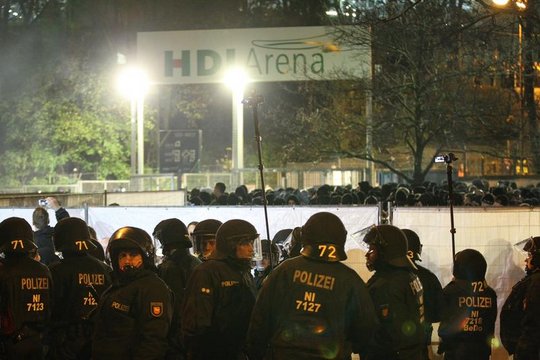 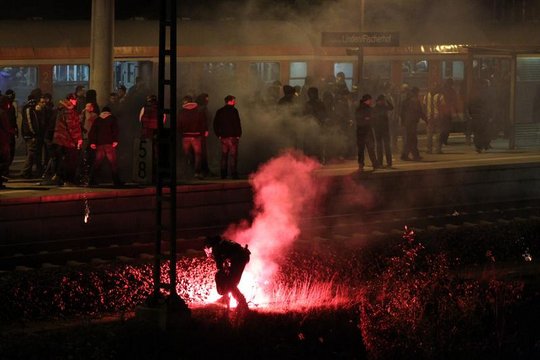 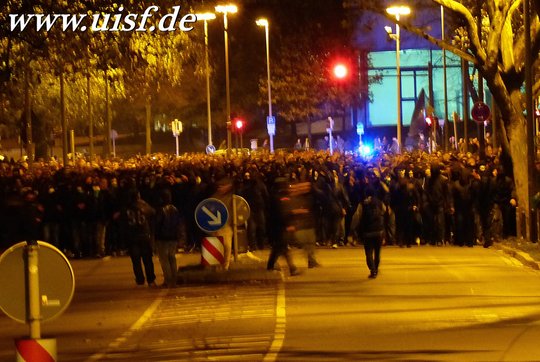 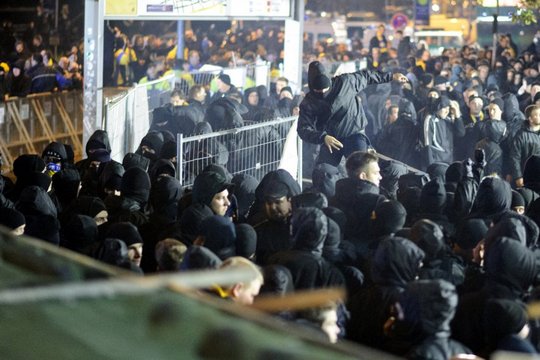 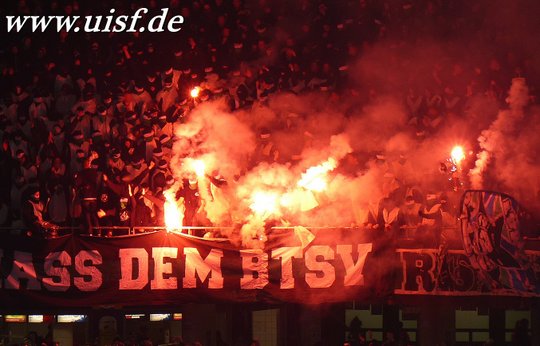 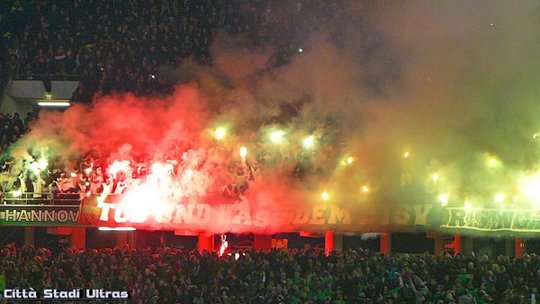 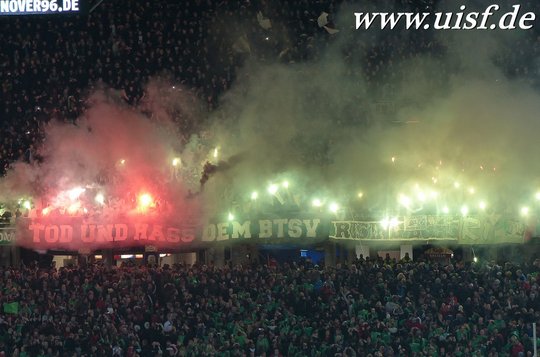 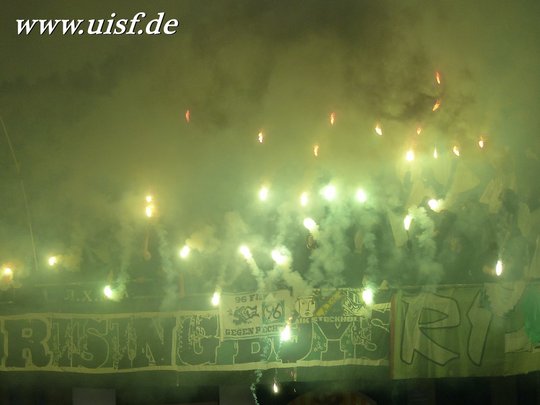 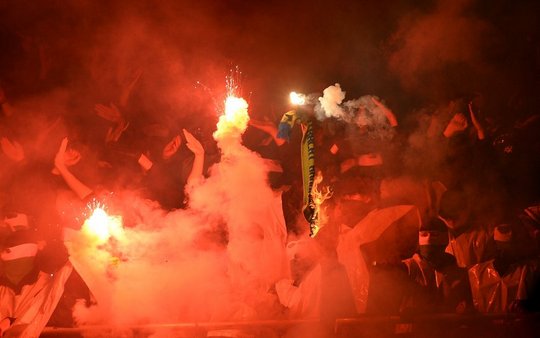 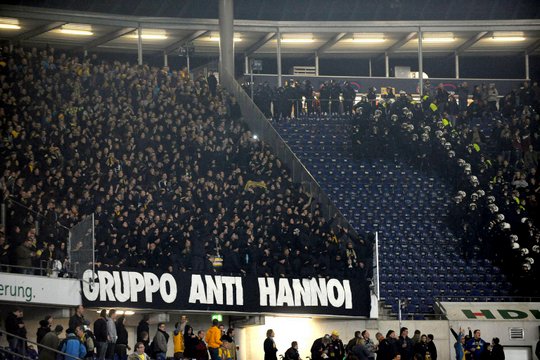 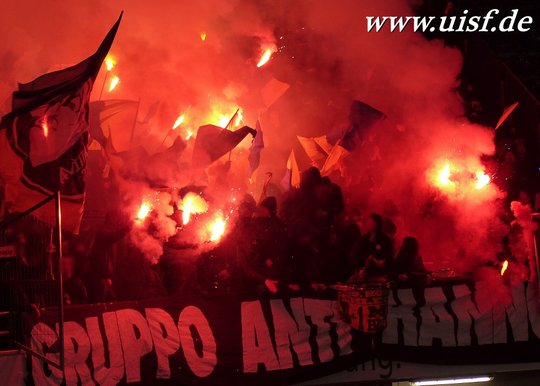 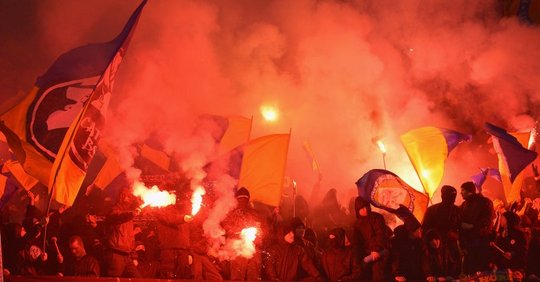 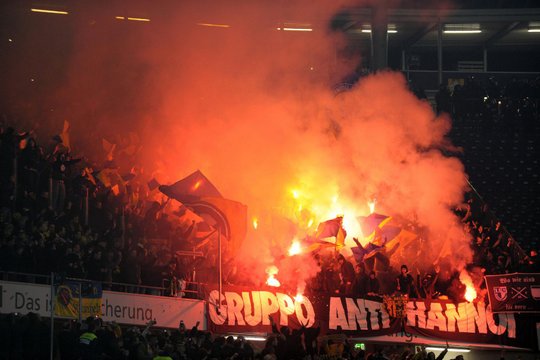