Another fantastic Copenhagen derby. Choreographies and a lot of pyro.

Fans of FCK started the show with one big banner follow by a choreography. One nice detail with the choreo - people hold 2-stick flags, not sheets.

After that FCK fans made a big pyro show which is quite rare to see in their home stadium!

Brøndby fans had one choreo and lot of pyro as well.

Report from our friends from UiSF.de

The Brøndby fans decided to gather at Svanemøllen station to march from there to Parken. However, as with the last derby, the Ultras decided not to take part in that march and to travel to the game in another way. In the end around 500 Brøndby fans – accompanied by the police – marched to the stadium together. Despite the singing as well as the use of several torches and fire crackers, all in all the march can be described as fairly unspectacular. The same accounts for the atmosphere before the game in front of the stadium, which can be described as very calm. Even 90 minutes before the game there weren’t many fans present and one couldn’t grasp the sentiment that the country’s biggest derby was to take place later. Suddenly I remembered reports saying that FCK was by far not as good at home than away and I got the feeling that this derby would by far not manage to beat the last one I had seen here when FCK won at Brøndby and thereby secured the win of the championship.

However, everything should turn out quite differently… The stadium filled up quite late and about 30 minutes before the game the two sides started chanting their first songs. It became obvious quite soon that both secenses would be showing choreographies that day. When they finally started presenting the choreographies, I was left speechless.

FCK presented a huge flag covering the whole lower tier, showing the skyline of the city and the name of the club in street art style – a really, really nice flag, one of the nicest I’ve seen in all my life. After taking down the flag after quite a while, the fans were showing plastic sheets in the FCK colours and a smaller flag displaying the club crest. At the upper tier a banner was fixed, saying “Klubben som ingen vil ku´ overgå”, meaning „The club that nobody can beat“. Smoke contemplated the choreography. A lot of smoke. More and More. Black, blue and white smoke, soon covering the whole stand. In the end, the FCK fans lit 60 to 70 toches in the front row of the lower tier. I couldn’t believe my eyes as the image was simply breathtaking.

The Brøndby were using small plastic flags all over the stand. The idea was to display „B.I.F.“ in yellow on a blue backbround. However, this didn’t work out too well and the second part of the choreography looked much better than the first one. Then the whole stand was using bigger flags in yellow, light blue and dark blue, all showing the club crest. In addition a lot of paper streamers were thrown in the air. They also included some light elements. All these different things added up to a nice and chaotic image, with which the guys from Sydsiden can definitelly be satisfied.

Shortly after kick-off, the home side displayed a Brøndby flag that apparently was supposed to be burned. However, the security guys were faster and managed to take the flag off the FCK supporters. Brøndby showed another pyro show consisting of yellow torches later during the game, which was also looked quite nice. The only thing that was missing that moment was loud and strong support. Apart from that, the atmosphere in the stadium can be described as brilliant. The FCK fans in lower tier of the stand opposite to the main stand were standing during the whole game. The fans there even joined in several times when the FCK supporters intonated their songs. The massive use of insults towards Brøndby, the type of some songs („Come on, FC“) as well as the high level of beer consumption strongly reminded me of the British football culture. Although some fans appeared quite drunk – they still managed to raise their voice and join in loudly and strongly. „Sektion 12“ showed a very strong performance throughout the whole game. The best part for me was definitely the jumping with the backs turned towards the pitch after the end of the game, when the whole stand joined in – brilliant to watch!

Apart from the first part of their choreography, “Sydsiden Brøndby” showed really great support that day. It was incredible how motivated these guys were. The main highlight was definitely the celebration of Brøndby‘s equaliser shortly after half-time: The safety-net was pulled down, the advertising boards were knocked down and some guys even found themselves on the pitch after this insane celebration. One could really feel the emotion, even when sitting some 50m away. The songs and chants of Brøndby were also really strong that day, only when they were about to clap the sides of the stand didn’t really join in.

Summing it up one can clearly say that this was an amzing football day, offering everything that a football fan’s heart desires. With a performance like this, the Copenhagen derby in my eyes makes one of the best derbies in Europe. 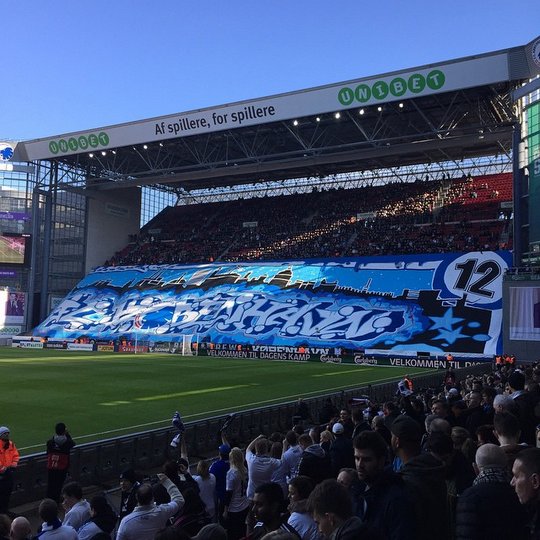 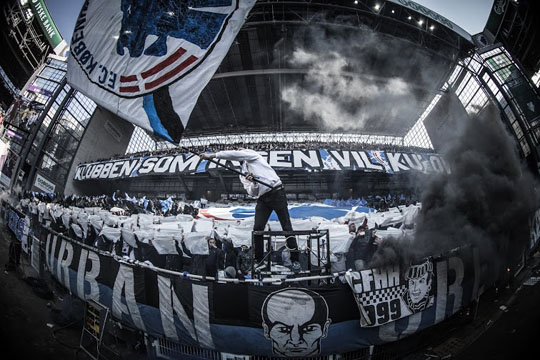 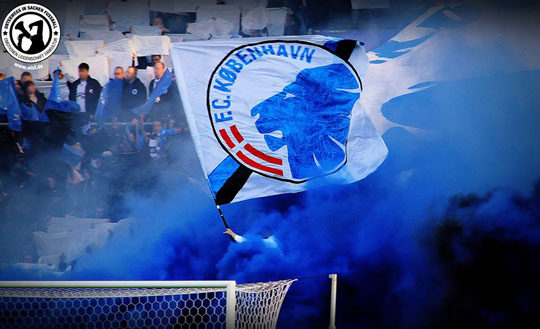 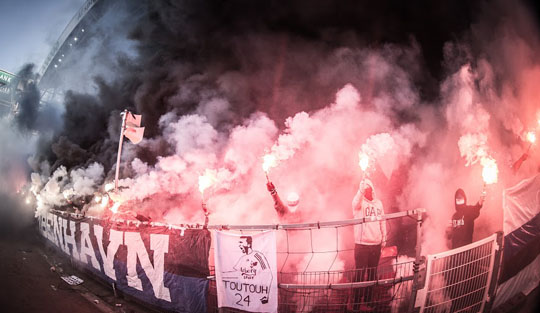 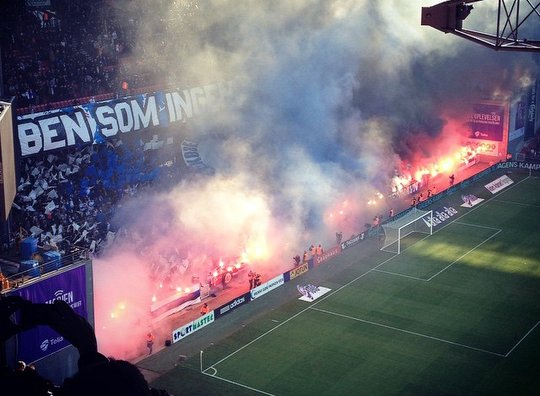 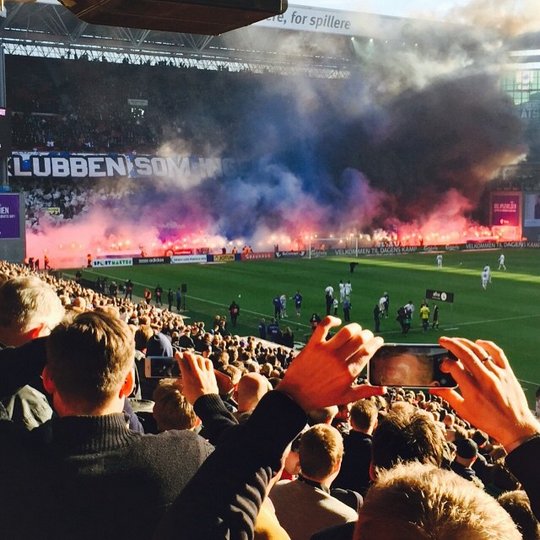 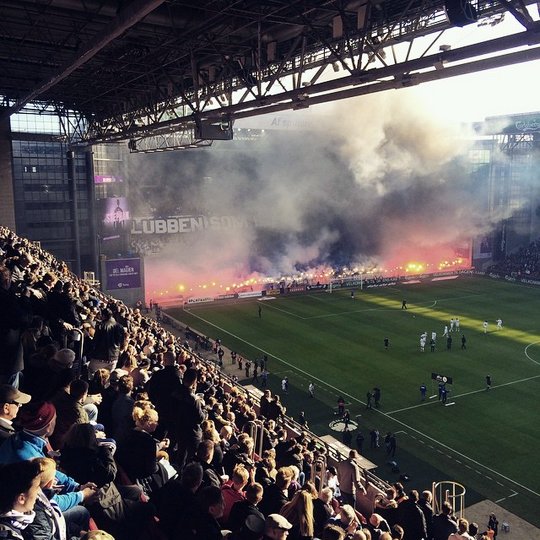 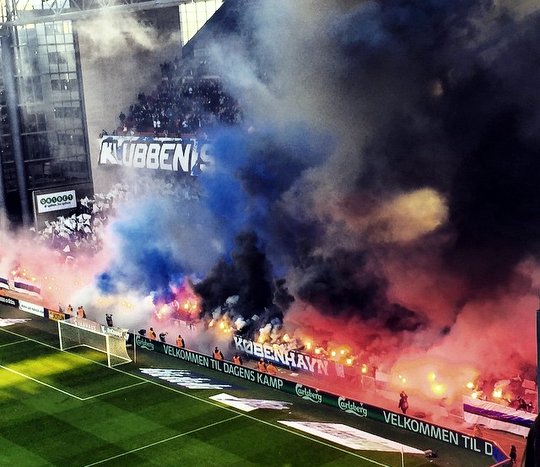 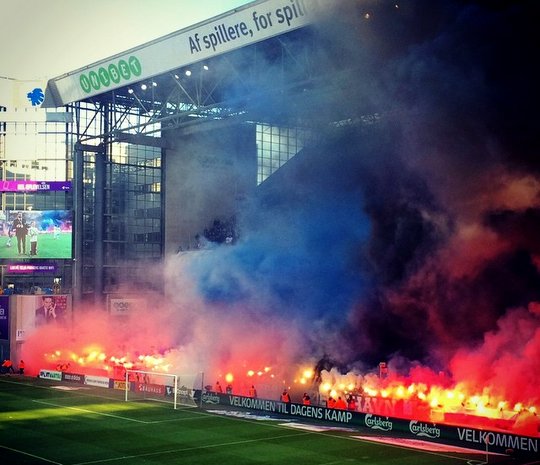 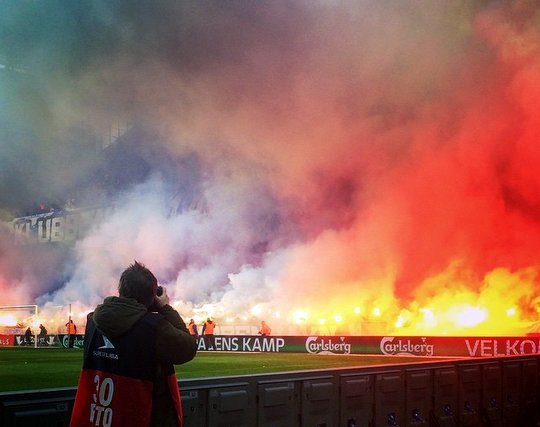 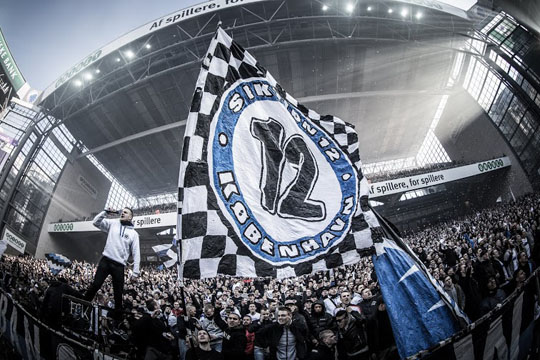 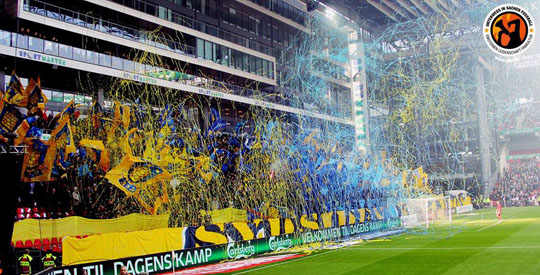 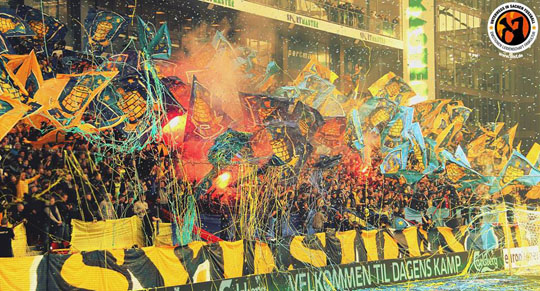 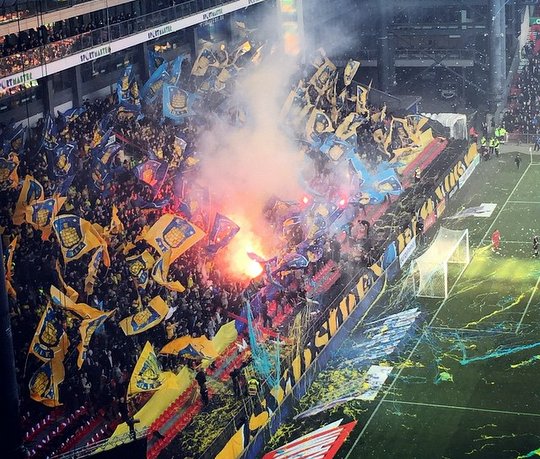 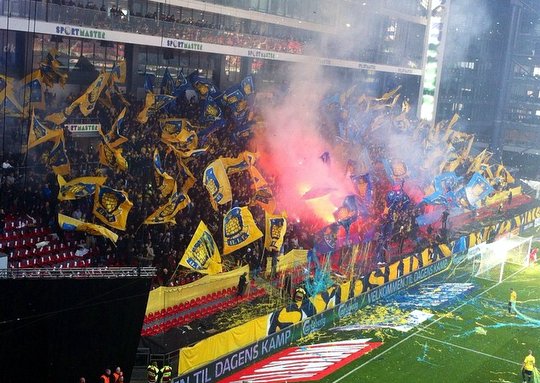 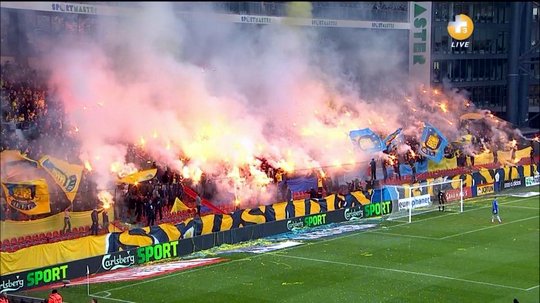 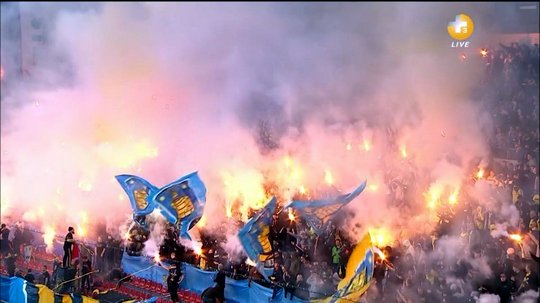 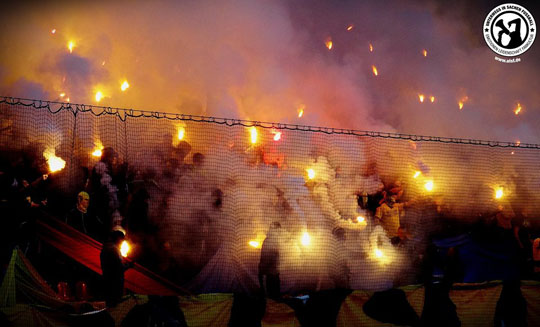 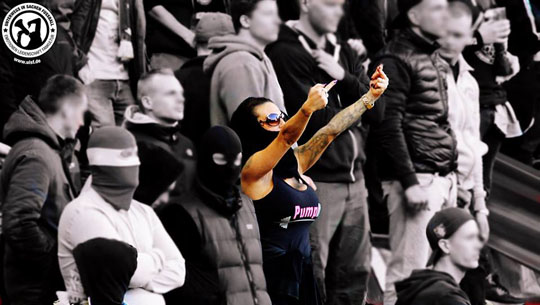