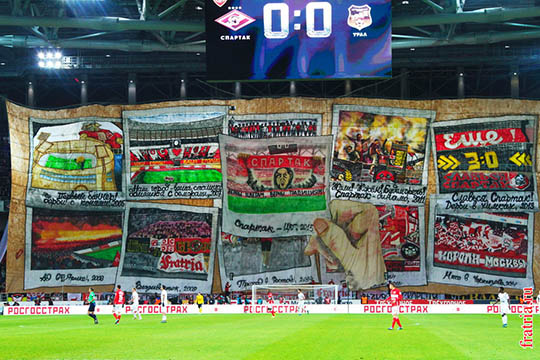 The tifo represent real moments of Spartak Ultras during the years. This was also for the 10th anniversary of Fratria!

Ultra North, Fratria contacted us with more info about the whole process!

I'd like to start this story about the jubilee performance of our organisation with congratulating everyone who've been involved into this event!

As always, we’ve started the performance preparation a week before, except for design layout ( for which we’ve spent around 2 weeks). The major idea was to gather the most significant & interesting footage from our football support life, accompanying us through the last ten years. 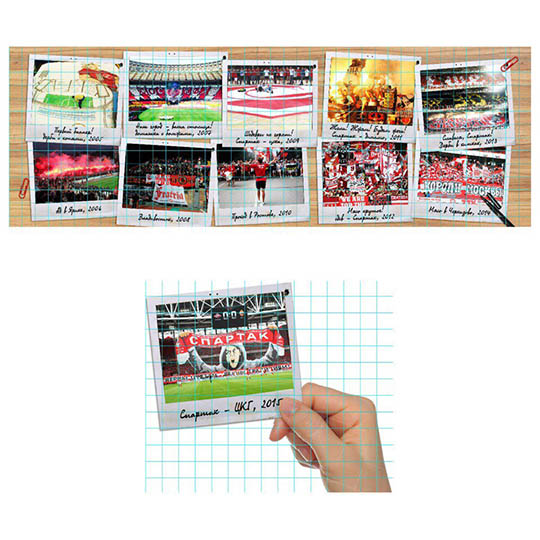 Indeed, it was necessary to understand and select placement algorithm of the photos as there are truly a lot to choose from as well as “movements” over the years with our participation. In the end, it was decided to organize the pictures by years, selecting not only performances, but also other aspects of our support to the club: whether it is away game or flags on two sticks or pyro or Corteo. We’d also like to pay attention to those people who raised and developed the support movement in past. Thank You! There were, of course, some arguments regarding each picture of the year, moreover, some of them were just impossible to draw with all the details. 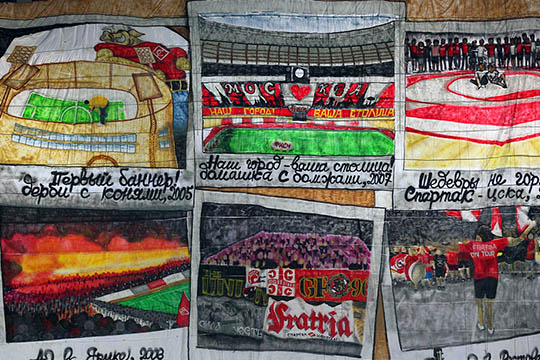 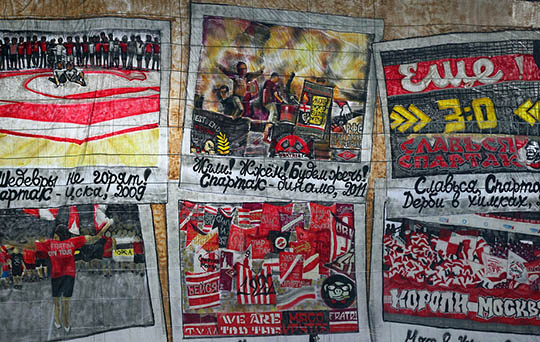 For the final shot we chose “True to colours, true to traditions” performance for a certain reason. As this was the first performance raised on the net, we’ve discovered a brand new "European" level, comparable to the top movements shows in Europe.

As during the last match of the national team, we decided to use three layers of banners: the major one - static (btw, for the first time we managed to keep the banner from sagging; it was perfectly stretched almost in the entire area which happened due to the increased number of winches). Before the static banner we had a dynamic one in the form of a hand, holding the final picture. We overdid a little too much with dragging the left side of the banner, but, eventually, managed to level it out and achieve the planned view. It’s well worth noting the front side of the “Spartak forever” banner, because its uplifting was purely improvised. It was not an option to fix this banner on the safety net, as we usually do, because it’d have spoiled the image of the major banner. The only way to solve this issue was to attach a bunch of ropes to the stretch, putting them through the cells of the net and then pulling them from the stand side. Pretty much everything turned out the way we’ve planned! During the Pyro (more on that later), the left side of the banner did sag a bit. Frankly, I didn't believe in this technology, but vainly in the end;) 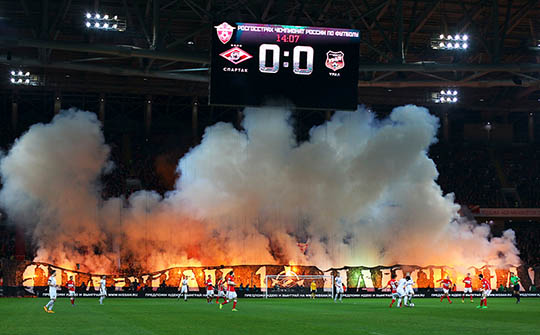 Talking of the preparation process, it was kind of typical way. As always, we were short in time & on materials we needed. We did finish the preparation at 7AM on the day of the match. 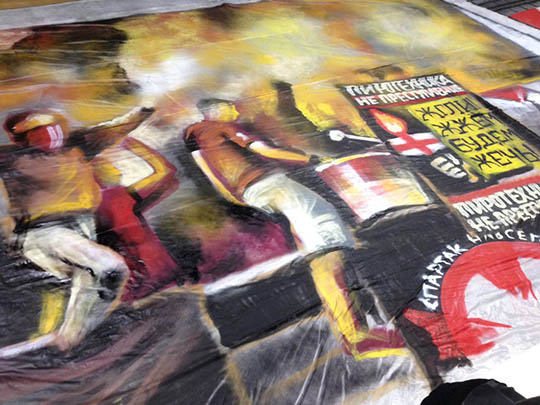 I’d like to mention our lads once again who made it all happen! By understanding the significance of this performance, they worked hard and broke the limit! 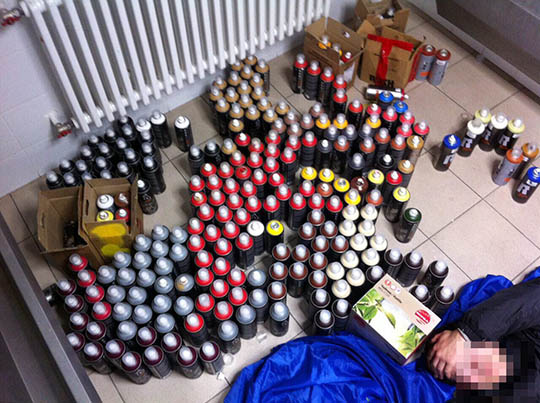 It’s normal that we’ve made some little mistakes, such as forgetting to draw a marker. But actually in the end it turned out to be an advantage, because we would have been short on black paint for the stretch. Big thanks to all boys from SG, you’ve rescued us.

Our people have also drew few banners devoted to tragic events that have happened recently in Russia. We've made a decision to start the match with a 5 minutes' silence in remembrance of all victims of the Metrojet flight 9268; and only after to start the performance. 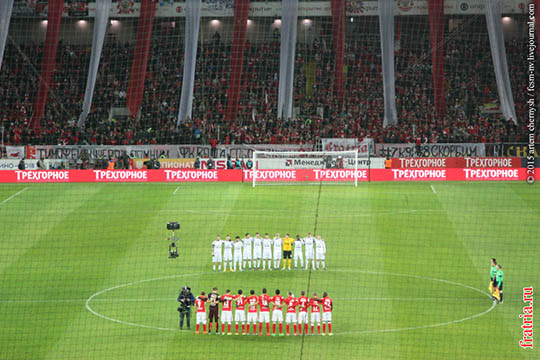 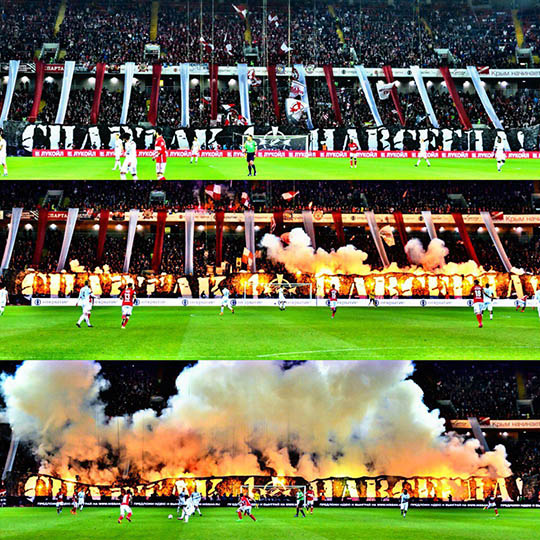 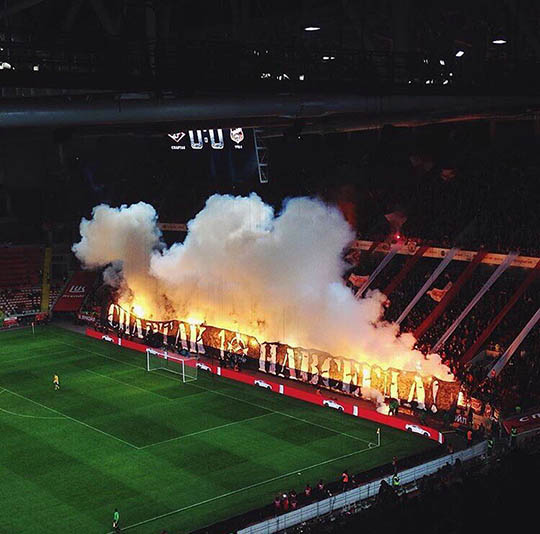 Many thanks to guys from Ultra, the North, G-7, Tula, BIS, Supporters Group for your support!

This show occurred to be one of the best in the history of Spartak ultra-scene. Many people started to compare large-scale performances at Luzhniki stadium with the current ones at the new Otkrytiye Arena stadium. I believe it is absolutely useless as those are completely different grounds. Luzhniki is a huge stadium which is a perfect place for modular choreographies. At the same time it’s inconvenient for banners because of its geometry as well as the required scale and cost aspects. At the new stadium it is also not that smooth due to low degree of the stands. There is absolutely no “nice way” to hang big banners from the second tier; and the layout is perfect to use just for the background during the daylight without the writings. For sure we can maximize the scale: for example, try to do the layout on the entire stadium, but it's quite costy and needed to consider a lot and work through all the nuances.

It is perfect to Lift up the banners on winches. It took us quite a while to start using it as in the beginning it did not go the way we wanted. Even though some people said that it’s kinda easy thing to do…! Maybe in theory it sounds simple but definitely not in practice! It is a hard and laborious process; it takes at least half a day just to fix the banner to the net. In a meantime we also need to build guides, then another few hours go for fixing the banner to tightropes and practise the uplift. At the stadium it seems like an “easy thing to do”, but technically speaking it is the hardest part of the performance process. Currently we’ve achieved what we wanted so in the nearest future we will pay less attention to such large scale performances but put all the focus on stands!

It is hard to imagine that 10 years ago a small group of Spartak fans thought where their idea of gathering into the group of co-thinkers will lead in their desire to support the team with grace and honour! It will stay in our memories for a long time! And as it says in the iconic movie about fans: “After all that you really do have to ask yourself if it was all worth it... course it fucking was!”

More photos from the match: 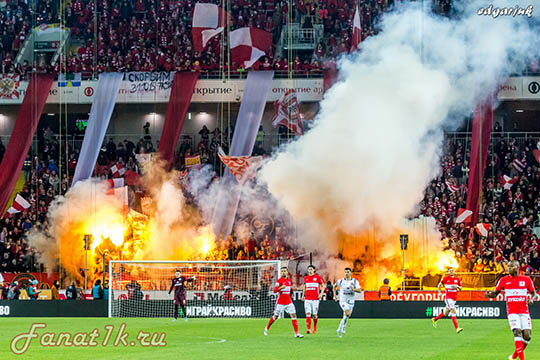 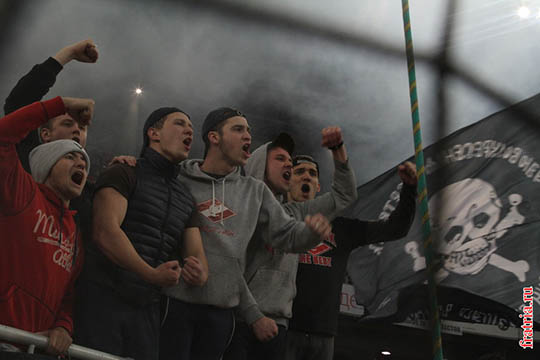 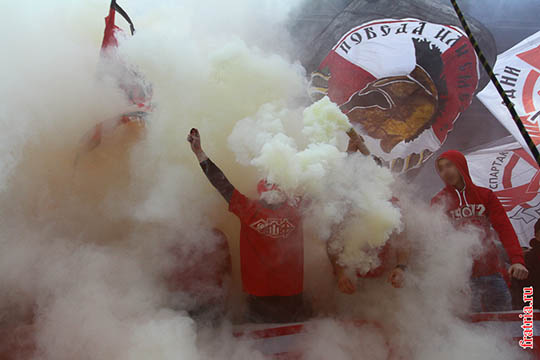 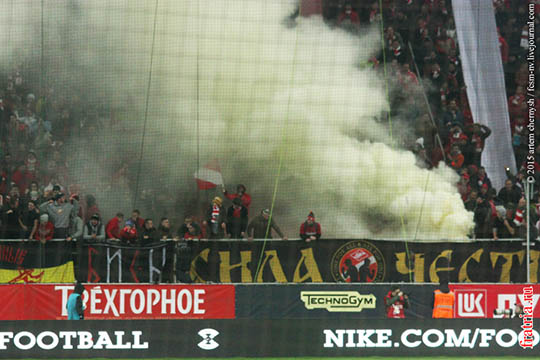 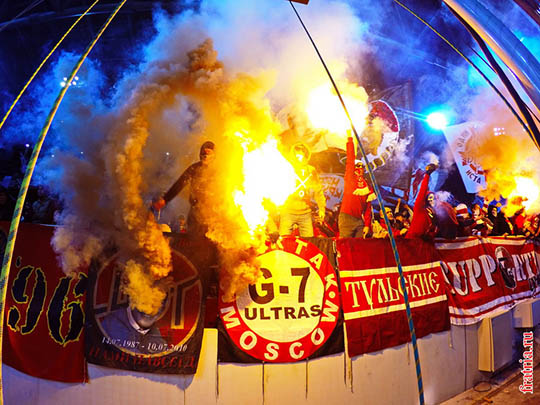 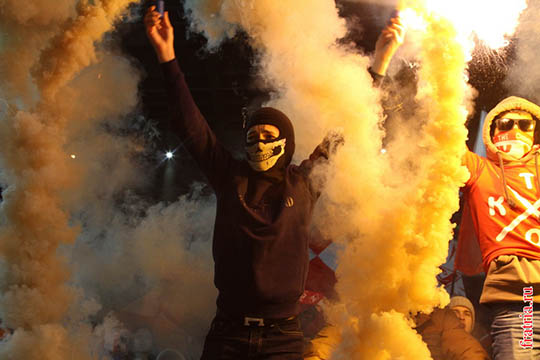