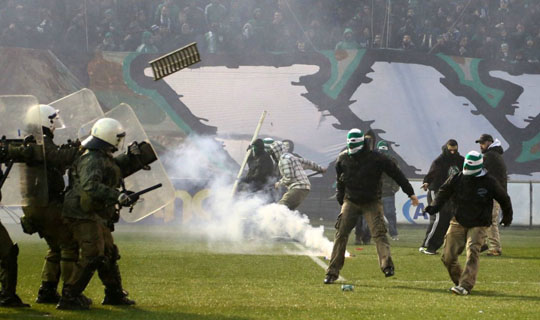 The Greek government has suspended professional football in the country indefinitely. The move follows violence at a match between rivals Olympiakos and Panathinaikos, as well as a brawl between club officials at a board meeting on Tuesday. The Greek league has already been suspended twice this season due to violence.

Newly-elected ruling party Syriza have pledged to stamp out the problem. The suspension affects the top three divisions in the country.

"What we have been informed is that the Super League and the Football League have been suspended indefinitely," Super League president Giorgos Borovilos told reporters. "We have a new government who are looking to bring this subject up for discussion and implement state laws related to it." Borovilos added: "The government wants games to start again as soon as possible, but for that they want to see immediate reactions from all of us."