From Jesi ,small city in Marche region. In the 80's they played in 4th division and a season in the 3rd division, now they are in 5th level.
Friendship with Fano.
Bigger local enemies are Ancona, Civitanovese and Samb. 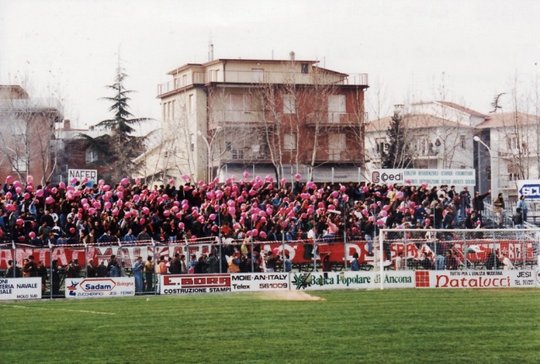 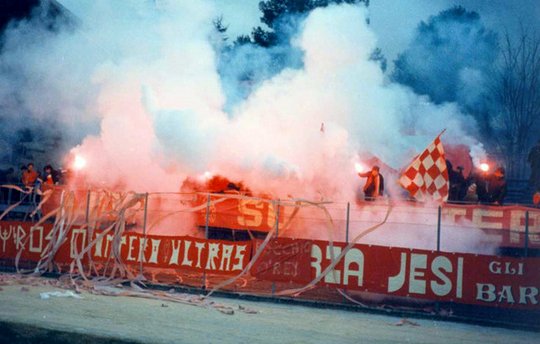 City near Naples, since 2011 they played in Serie B. In the 80's and 90's they were mostly in 4th and 3rd level.
Historic Group Swarm Supporters born in '84.
Friendship very old with Siracusa.
Biggest enemies are Nocerina, Verona, Sorrento, Turris, Salernitana and Foggia. 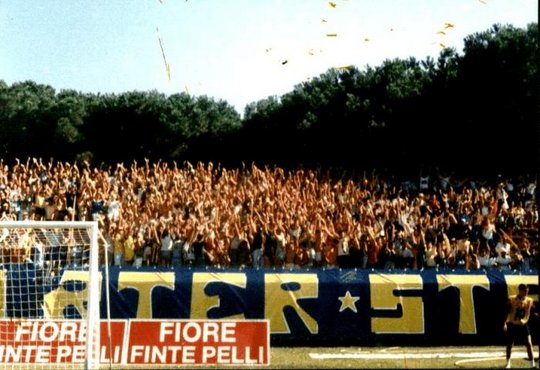 The most winning and most supported club in Italy, also the most hated by other fans. Team play in Turin but many ultras come from other regions and leader now come from Milan.
Many historic groups: Fighters, was born in '77 ,ten years later changed name in Drughi but in the half of the 90's again back to Fighters. In 2005 Drughi banner came back and after internal fights, Fighters disappeared and became actually Tradizione and Antichi Valori.

Other groups are Viking based in Milan. Nucleo from Veneto region and Bravi Ragazzi (once called Irriducibili). Another important section is in Marche but they have ultras from all over the country.
Friendship with Legia Warszawa (Poland), Den Haag (Holland) and in Italy only some good relation or group contacts like Latina, Siracusa and Pescara.
The rest are enemies: Torino, Inter, Fiorentina, Napoli, Milan, Genoa, Roma the bigger ones.
Right wing 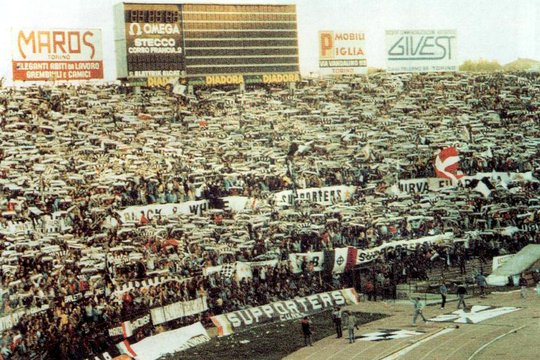 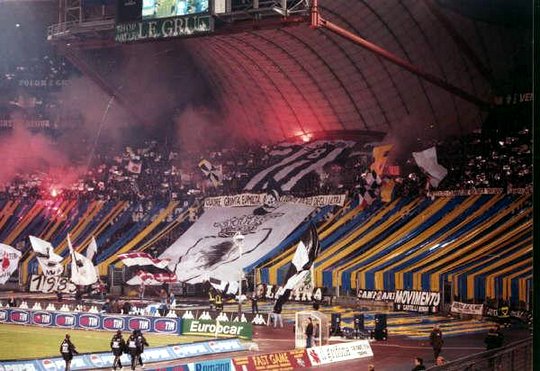 Small city in Abruzzo region, not big history for this club, they played in 2000 first season in 3rd division, and now are playing in Serie B for the second time.
Historic Group was CUCS (Commando Ultra' Curva Sud) born in '85.
Friendship with Andria, Bisceglie and Montevarchi.
Local derbies against Chieti,  L'aquila and Pescara. 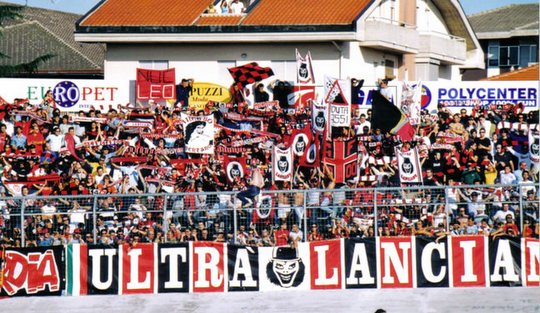 City in Abruzzo, almost destroyed by an earthquake in 2009. In 2004 after a failure they had to restart from 6th level but now they are back in 3rd division.

City near Rome,founded by Mussolini as Littoria in the 30's. Small club that usually played in 4th or 5th level but last year was promoted to Serie B for the first time ever.
Historic groups were Ultras born in '72 and Falange born in '78, more recently Brigata Littoria in 2002.
Friendship with Reggina and Siracusa.
Local derby against Frosinone, also rivals with Paganese and Nocerina.
Right-wing 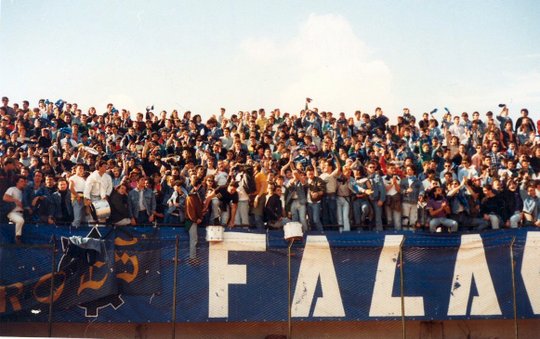 First club of Rome, they won two titles in '74 and 2000 and many cups ,also European. In the 80's they also played some season in Serie B and in 1987 they won qualification game for not be relegated to 3rd division.
Historic groups are CML (Commando Monteverde Lazio) born in '74. Viking in '78, Eagles supporters (leading group between 1977 and '90) and in 1987 Irriducibili was born ,one of the most famous groups in Europe.
Friendship with Inter, Triestina, Real madrid, Levski sofia, Espanyol and more.
Biggest rivals after Roma are Napoli, Milan, Atalanta, Juventus, Pescara, Genoa, Fiorentina, Livorno,ecc
Right-wing 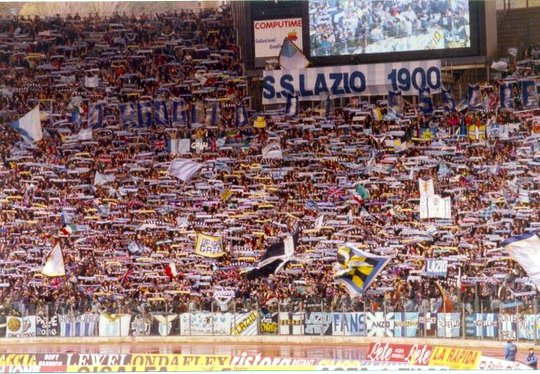 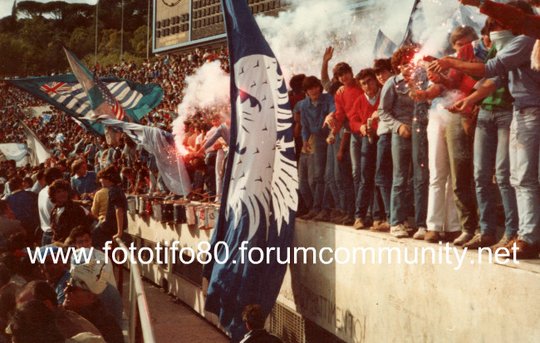 City in South of Italy. Since the 80's they were playing in Serie A or B but now in 3rd division.
Historic groups was CUCN born in '79 and Gioventu'. Today's leading group Ultra' was born in 1996.
Friendship with Palermo.
Big regional derby against Bari, other enemies are Salernitana, Taranto, Reggina, Napoli, ecc 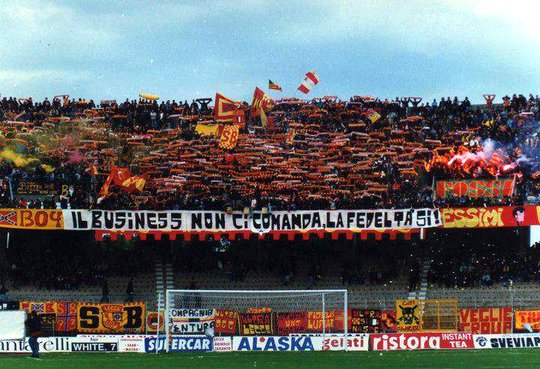 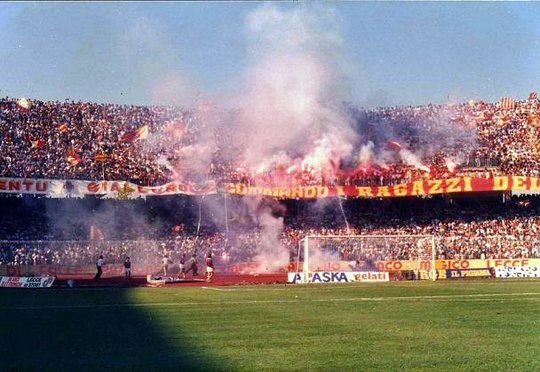 Small city near Bergamo,  in the 60's they played in Serie A and B, now they are in 5th division.
Historic groups were Mods, Brigate, Der Adler, Front, all of them founded in the 70's and 80's.
No official friendships.
Local derby with Como. 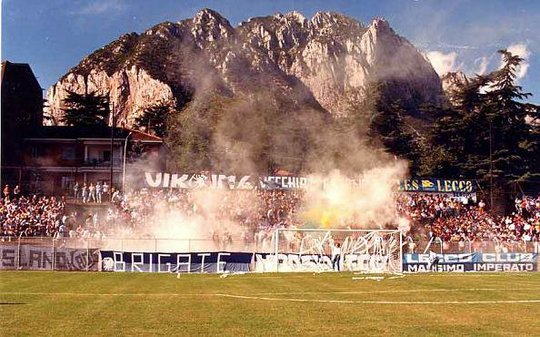 Little city near Milan, pretty historic club that played in the 50's in Serie A and B.
After a football life mostly in 4th level they failed in 2010 and now play in 6th division.
Historic group is Boys Lilla born in 1980 and still active.
Friendship with Mestre and Sanremese.
Local derby against Pro Patria (near Busto Arsizio city) 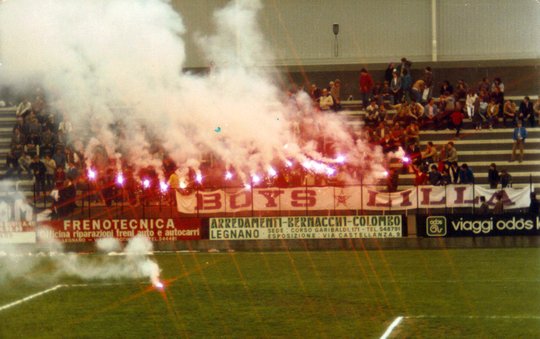 City in Sicily, played two season in Serie B between '88 and '90. In 1994 they failed and played until 2010 in local leagues. Now they are playing in 5th division.
Friendship with Nissa.
Local derby against Akragas. 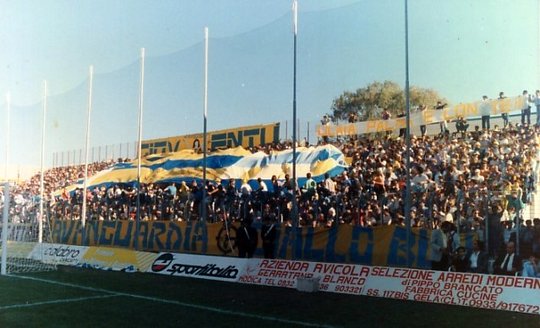 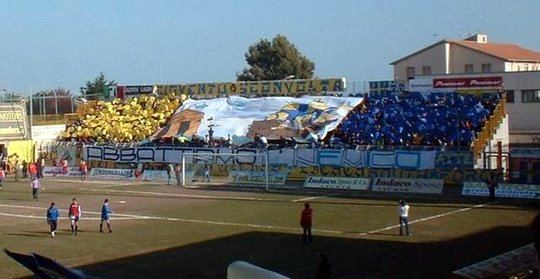 City in Tuscany, in 2004 they came back in Serie A after many season in 3rd and 4th division. In 2006/07 also played in Europa League.
Historic groups: Ultras born in '76, after that Fedayn and Fossa. In 1999 born BAL (Brigate Autonome Livornesi) one of the most famous in Italy that suffer around 400 banned lads and stopped activity in 2003.
Friendship with AEK Athens (Greece) and O.M. (France)
Local derby, one of the most intense, with Pisa.
They are the most left-wing stand in Italy with Ternana so in the last years all right-wing ultras became enemies (like Verona, Lazio, Roma, Catania,ecc). 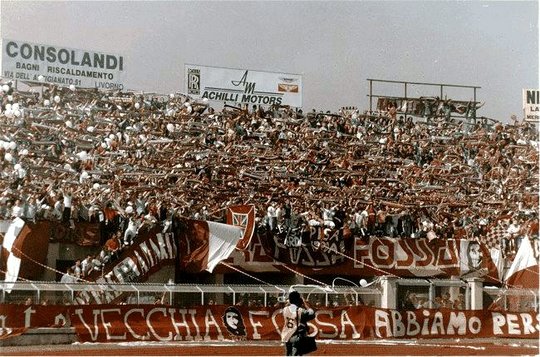 Small city near Pisa, they played all the 90's in Serie B. Recently they failed and are now in 5th division.
Historic Group was Panthers Front born in '77.
Friendship with Massese.
Many local derbies against Viareggio, Pisa, Empoli, Livorno,ecc
Right-wing 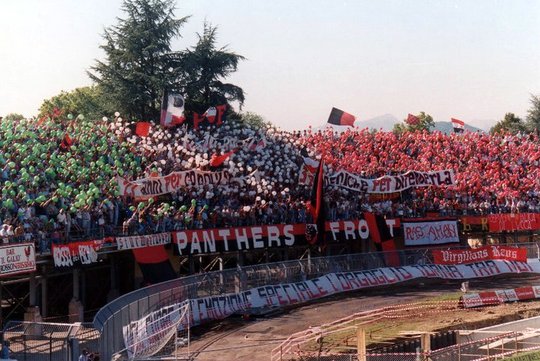 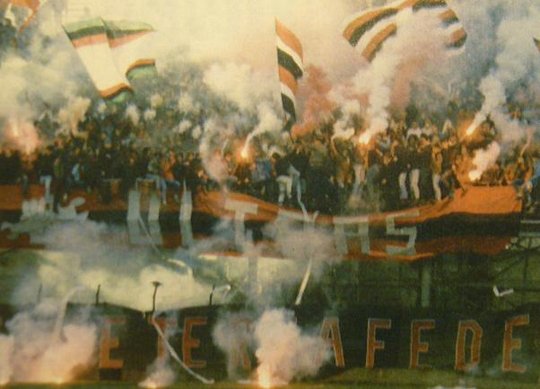