Many great groups from clubs starting with letter M. Perhaps a few less know groups as well which had their glory days 30 years ago.

City in North of Italy. In the 60's they played six season in Serie A, between 2005 and 2010 they were in Serie B, but after that they failed and are now in 4th division.
First groups born in the 70's. In 1986 born Virgilian kaos, leading group for twenty years.
Friendships with Brescia, Cesena and Prato.
Biggest enemies are Verona and Cremonese. 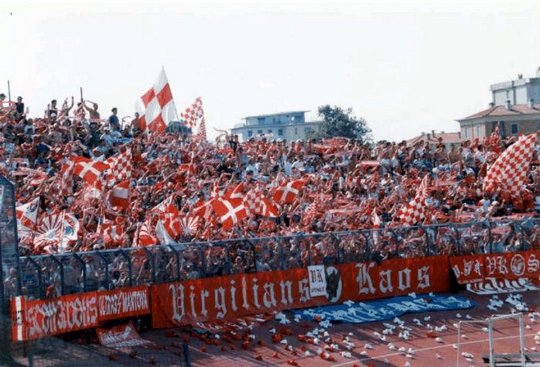 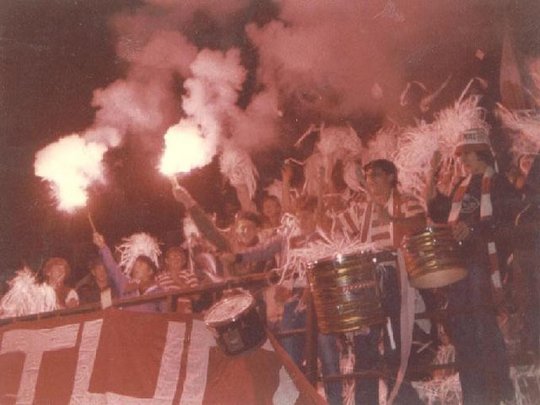 City in Tuscany. Club usually played in 3rd and 4th levels but now after a failure they are in 5th division.
Historic Ggoup is Ultra' Massa born in '75.
Friendship with Triestina and good relation with Lucchese.
Local derby against Carrarese, also Pisa, Spezia and Viareggio are big enemies.
Right-wing 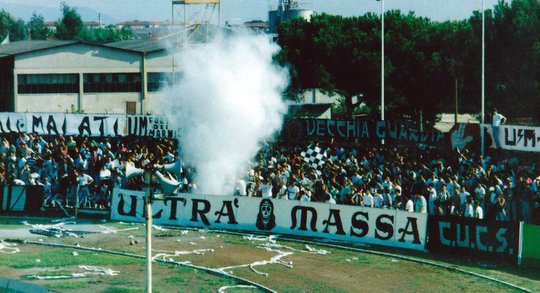 City in South of Italy, small club that played only once in Serie B (1979-1980). Not played in Pro leagues since 1997 and are now in 5th division.
Historic groups were Viking Korps born in '78 and Pessimi Elementi born in '90, both finished their activity now.
Friendship with Trani, Battipagliese and Vis Pesaro.
Regional derby against Potenza, other enemies are Taranto, Brindisi, Turris, Savoia, ecc 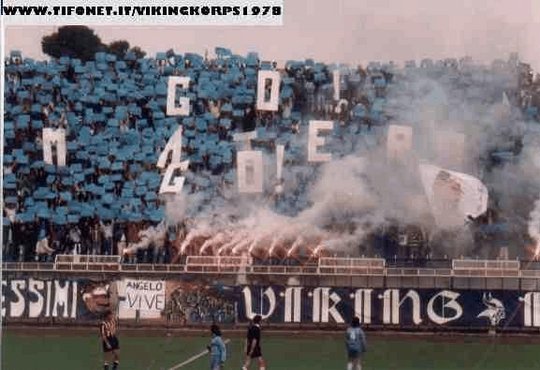 City in Sicily. 32 times in Serie B and 5 times in Serie A, last time in 2006/07. After been relegated they failed and in 2008 they had to restart in 5th division (play in 4th division now).
In 2003 they changed stadium to a new bigger stadium,but old stadium "Celeste" was one of the hottest in Italy for away teams.
Many historic groups: Fedelissimi 1973, Gioventu' '80, NOCS '83 and so on.
They have two different stands for ultras.
Friendship with Pescara, Modena, Frosinone, also good relation with Avellino and Cavese.
Biggest rivals are Reggina, the city in front of Messina and Catania, two local derbies with them. 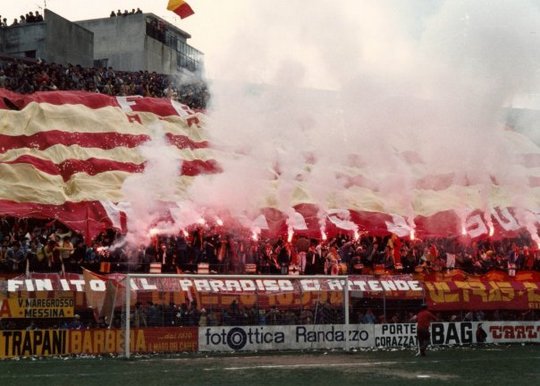 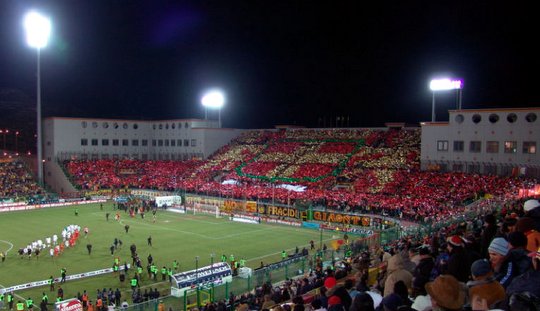 From Venice district on the mainland. In 1987 Venice and Mestre clubs were united by Zamparini (now the president of Palermo) but ultras from Mestre and Venice are rivals and many people don't like this new founded club. They redounded their club Mestre in '91 and are now playing in 8th level of Italian football.
Historic group "Head" out was born in '86.
Friendship with Legnano.
Local enemies were Venezia, Treviso and Padova. 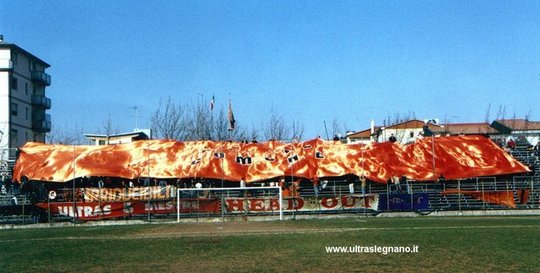 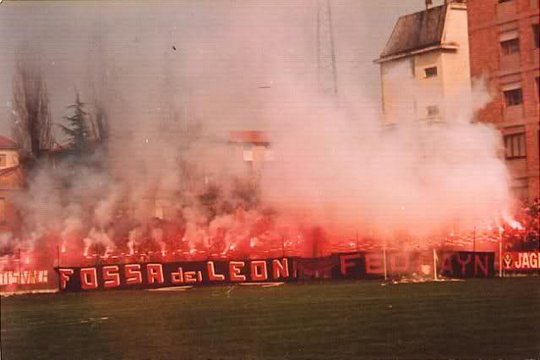 One of the most famous and winning clubs in Europe. In the 80's they played two season in Serie B.
Historic groups are Fossa dei Leoni born in 1968, first ultras group in Italy.  In 1975 born Brigate, another historic Group is Commandos Tigre, still present in the lower part of South stand.
Friendship with Brescia.
After Inter, big rivals are Genoa, Napoli, Roma, Juventus, Atalanta, Verona, ecc 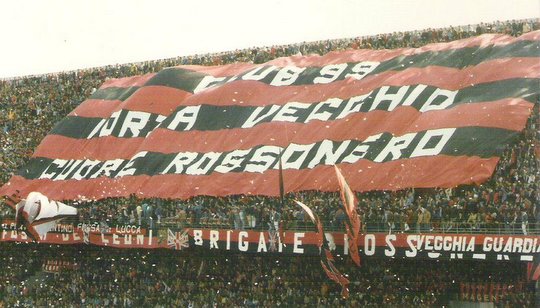 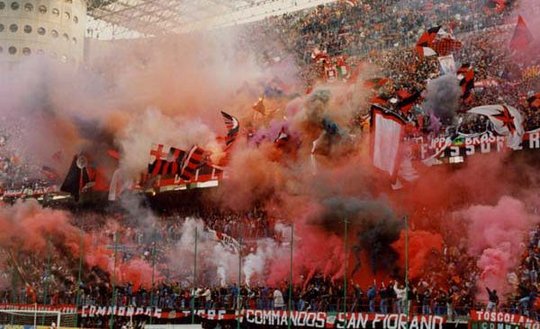 Small city and club in Sicily, used to played in local leagues. After three season in 4th level they stopped and there is no more football in this city.
Historic group "Ultras" born in '84.
Friendship with Vigor Lamezia.
Local derby with Igea Virtus. 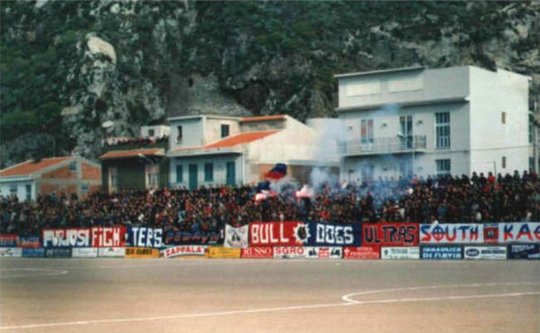 City in Emilia region, club is playing in Serie B as most part of their history.
Historic group is Brigate, born in '75.
Friendship with Venezia, Pistoiese and Messina, recently also with Sevilla.
Local derby against Bologna and Reggiana, other enemies are Cesena, Genoa, Como, Verona, Brescia, ecc
Once left wing now apolitical. 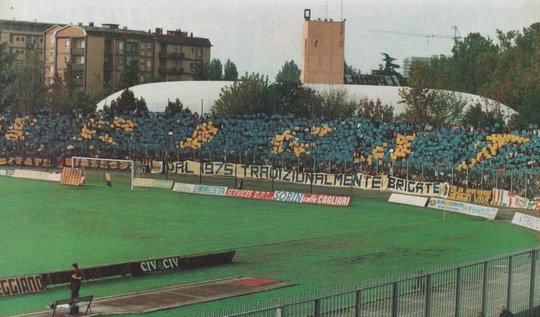 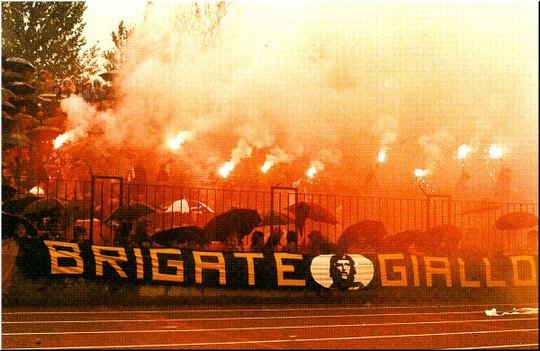 Small city near Bari, club played in 3rd level in the 80's now they play in 5th division.
They are famous for beautiful materials (flags, banners, ecc)
Historic groups are Army korps born in '80, Bad Boys '87 and Ultras '93.
Friendship with Salernitana and Chieti.
Many local derbies with Casarano, Brindisi, Andria, Barletta,ecc 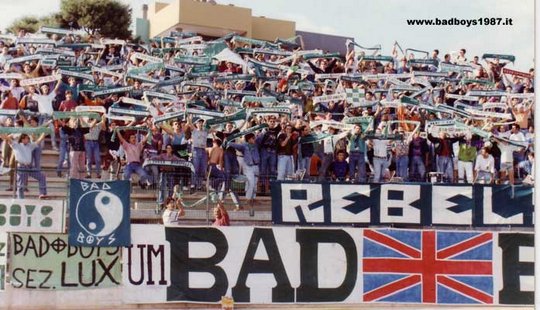 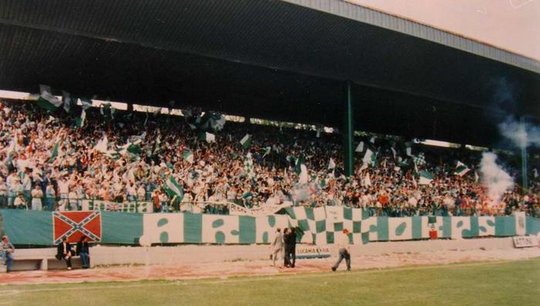 Small town in Tuscany. Blub used to play in 3rd and 4th level before 2006, but after that they failed and restarted from local division, now they are in 8th division.
Historic group Brigate.
Friendship with Empoli and Perugia.
Bigger rival is Arezzo.
Left wing 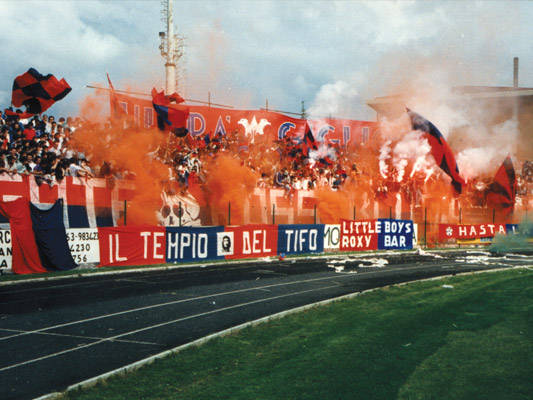 Big city near Milan. Good club that played 38 times in Serie B but small audience because of Milan, Inter and Juventus have more fans in this area. Now they are playing in 4th division.
First group were "Ultras" and "Brigate" in the 70's. Eagles was leading group in the 80's and after SAB (Always at Bar, in Italian) and Gioventu' Brianzola in the 90's.
Friendship with Triestina and Foggia.
Bigger enemies are Como and Varese. 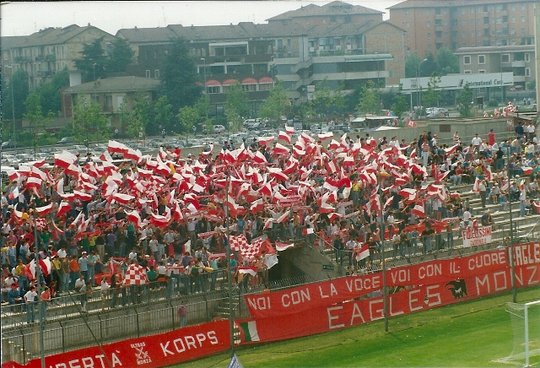